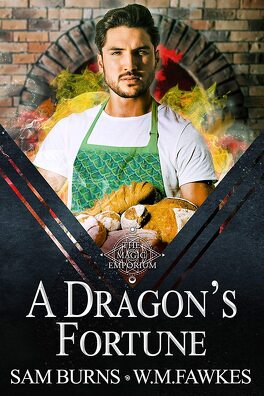 Cillian Roarke is the world’s sweetest dragon. He’s a great boss, a good person, and he spends his days making honey-glazed caramel treats in the shape of bunnies for his bakery, Honey Bunny. Still, the highlight of every day is watching the adorable college student who’s Much Too Young For Him stuff his face full of Cillian’s sweet buns.

Finnick West is a college student who dreams of baked goods, much to the consternation of his figure-skating partner. She’s not offended by the temptation, but by Finnick’s continuing failure to ask out the cute baker. With pressure from all sides, Finn knows it’s time to take something for himself, if only he can catch Hot Baker’s eye.

While the two of them work up the nerve to ask each other out, an assassination attempt reveals forces working to not only stop their interspecies romance in its tracks, but destroy everything and everyone they love.

A Dragon’s Fortune is part of the Magic Emporium Series. Each book stands alone, but each one features an appearance by Marden’s Magic Emporium, a shop that can appear anywhere, but only once and only when someone’s in dire need. This book contains dragons, ice skating, a whole bunch of sugar, and a guaranteed HEA.

I sighed and dropped the cracked third cookie back onto the pan. “Not very well, I’m afraid.” I motioned to the broken cookie and the three others, still on the pan. “I can’t seem to get them quite right. They either set too quickly, so I can’t fold them fast enough to keep this from happening, or they stay too soft, and who wants a soft fortune cookie? They feel stale.”

“I always thought they were made with machines,” he said, inspecting my two successes. “I mean, not that I know much about baking. I, um, I thought about learning! But it probably takes a lot of work.”

The emotions that crossed his face as he spoke were so hard to follow that I thought I must be imagining it. Who—other than me—had such strong emotions about baking? The last expression, though, a strangely sad look to have about baking, stuck.

The point of my work was to make people smile, not whatever that look was. So I spun around to the case, looking over what was left. “Custard, right? Or was it cream cheese?” I could pretend I didn’t know which he preferred, but that was a total lie. He just ordered them equally often, and I could have counted the exact number of times I’d gotten him either.

“Both are pretty great,” he said after a moment. “I mean, as long as they’re your buns, I’m all over them.”

I blinked, staring blankly into the eyes of the dulce de leche filled bunny in front of me. There was no way he’d meant that how it had sounded. It had been awkward for both meanings, but surely he’d been talking about the pastries. Right?

I cleared my throat and straightened, then flashed him a painfully awkward smile over my shoulder. “Then I’ll just grab you one of each.” And then, as subtle as a bulldozer, I asked, “Anything for your girlfriend?”

“My what?” The words made my heart leap in my chest. Even if he was dating, he wasn’t thinking of her while talking to me.

Still, if he was dating, that was important whether he was thinking about her right now or not. “Girlfriend,” I reiterated as I turned back to the counter, a bunny in each hand. “Beautiful girl, ebony skin, million-watt smile?”

“Oh!” he said, grinning and relieved. “You mean Wallace. She’s not my girlfriend. She’s my partner. For skating. My skating partner. We’re not married or dating or anything. Just best friends.” He started to open his mouth, as though to continue, but snapped it shut again. His cheeks were a little pink, and I couldn’t say if it was from his previous physical exertion, or if he was embarrassed.

Cute college guy who was way too young for me had nothing to be embarrassed about, but I’d put my foot in my mouth enough times to recognize the verbal floundering that came along with it. Yes, his name was Finnick and I knew it now, so I didn’t have to keep thinking of him like that, but it was good to remind myself.