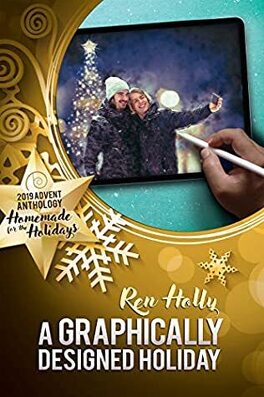 Graphic designer Eli has harbored a secret crush on nerdy math teacher Lincoln since they were at school together, and he’s perfectly content with his unrequited feelings—until Lincoln requests a special handmade holiday gift: a dating profile with all the bells and whistles Eli can include, one that will be sure to find Lincoln a boyfriend for Christmas.

Eli uses building the profile as an excuse to spend time with Lincoln, but will he be able to watch his friend find love with someone else?

He pushed the bourbon across the table. “What’s the occasion?” he asked. Rarely did Lincoln indulge in anything better than the bottom shelf. “Are we celebrating or commiserating?”

“It can’t be that bad.” Eli settled back into his chair. “Did your students fail their exam again? Just curve it. I’m pretty sure I would fail it, and I’m almost an engineer.”

“It’s not that,” said Lincoln, amused. “Well, I mean, they did fail their test, but like you said, that’s not out of the ordinary.”

Eli shook his head. For all of Lincoln’s grumbles and groans about the inadequacies of his students, they still managed to garner some of the highest scores in the state exams every year. “What is it, then?”

“I wasn’t planning to tell you.” Lincoln took a swig of bourbon and turned his attention to the window.

Eli frowned. He had known Lincoln since his freshman year at Princeton. They had taken advanced calculus together, and there was no way not to bond in a class that felt like hazing. Half the reason—okay nine-tenths of the reason—Eli had so vigorously pursued a graphic design career in Washington DC was because that was Lincoln’s postgraduation destination.

In college Lincoln often pulled all-nighters to help Eli with his graphically designed fliers, even if that help was mostly just companionship. After they finished Lincoln always took a small stack of the fliers and hung them in silly places for Eli to find. On one occasion Lincoln had secretly enlarged the design to poster-size and hung one on either side of the FitzRandolph Gate. It was exactly in that moment that Eli had fallen madly and irrevocably in love.

“It must be a pretty big deal if you can’t even trust your best friend with it,” grumbled Eli.

“I don’t even know why I try.” Lincoln rolled his eyes. “I’m terrible with secrets, especially my own.”

Eli felt stricken. “Romance?” he asked hoarsely. “What do you mean?”

Lincoln pulled a laptop from his bag and, after a series of clicks, pushed it toward Eli. “That’s my dating profile,” said Lincoln. “I dare not tell you the ratio of sent-to-received messages, but please bring your attention to the big fat zero hovering over the inbox.” He sighed dramatically. Leave it to a math teacher to talk about messages in terms of ratios.

Eli glanced down at the laptop with trepidation. His eyes fell to the creation date—November 13. Lincoln had made the profile two weeks ago. Eli bit the inside of his cheek, trying not to imagine the horror of being introduced to Lincoln’s boyfriend. It generated a tight, nauseating feeling. No one deserved him. Eli swallowed, eyes still fixed on the screen. To his delight the profile picture was a horrendously unflattering selfie taken at least ten inches too low. Lincoln’s perfect, angular jaw was lost somewhere in his neck, and his expression was awkward at best.

The “About Me” section was practically nonexistent. It mentioned looking for a serious relationship and Lincoln’s teaching profession. There were absolutely no indications of Lincoln’s sparkling wit and generous character. Eli was vastly relieved.

“I rather like your profile the way it is,” said Eli, pushing the computer back across the table. “Besides, you should find someone that likes you for who you are.” Someone like me.

Lincoln’s brows fell into a heavy, unamused line. “Even I can tell the problem is my lack of artistic abilities,” he said. “I’m not eloquent or artsy in any way, but—” Lincoln’s eyes lit up. “—you are!”

“What?” Eli struggled to keep up.

“Have you gotten me a Christmas present yet?”

“All I want this year are your graphic design skills,” Lincoln said, lacing his fingers. “I think all my profile needs is a little professional TLC.”