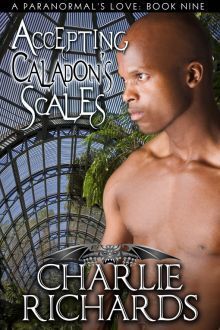 Into the Paranormal World: Sometimes going against family leads to better rewards than sticking with them.

After seventeen years in captivity, Caladon O’Hara is freed from his cage by gargoyles. His rescuers take him to their manor, give him a safe place to recuperate, and set him up with a new identity, Caladon Wykert. They also aid Caladon in tracking down information about his son, Taolma. Upon seeing a picture of his son’s face after so long, Caladon goes into mild shock, overwhelmed at seeing him as an adult for the first time.

Nurse Leroy Wilde works part time at the gargoyle’s mansion. He handles daytime shifts since Perseus, the clutch’s head doctor, has not yet mated and turns into stone during daylight hours. When he spots Caladon through a doorway, he’s quickly smitten by the tall, handsome shifter. Still, Leroy keeps his distance. He’d tried dating an African American once before, and due to his family’s bigotry, it hadn’t turned out so well.

When Caladon suffers a shock, Leroy is called to help. His mere presence yanks Caladon out of his stupor, only for the shifter to declare they are mates. Leroy is unable to resist the siren call of the mate-pull, and he agrees to a date. He quickly discovers that his family isn’t the only complication…because at the time of Caladon’s kidnapping, he was still married. Mates or not, Leroy refuses to get involved with a married man.