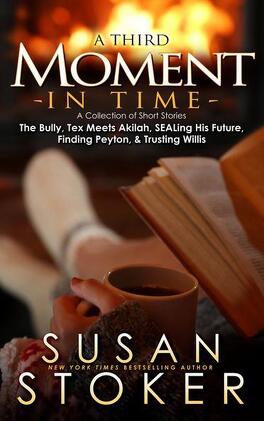 A Third Moment in Time is a collection of stories by Susan Stoker, including 3 short stories that have been published previously in recent anthologies, a story written specifically for social media, and a brand new, never been published novella featuring a beloved character from the Silverstone series.​​​​​​​

The Bully: When a bully at school targets the seventh-grader, Annie Fletcher is on her own. But after getting some advice from Truck…it’s game on.

Tex Meets Akilah: How Tex and Akilah met and how she captured the Veteran SEAL’s heart without even trying.

SEALing his Future: Two of the most popular of Susan Stoker’s characters (Tex and Baker!) meet on a Navy SEAL mission…and one finds out the truth about the woman he thought loved him and was waiting for him to return home safe and sound.

Finding Peyton: When Peyton realizes she’s purposely been left in the middle of the ocean to die, she almost panics…until she realizes that the handsome Navy SEAL she’d been ogling earlier on the boat that had ditched them, had been left behind as well.

Trusting Willis: Gregory Willis spends his vacation getting to know his neighbor, Maylah, as well as tracking down the carjacker who put her in the hospital in the first place. He’s lost one woman he loves, he won’t lose another.