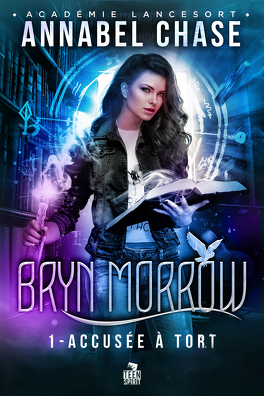 "I barely touched you," I said. "How do you expect to become a full-fledged warden if a girl can't even pinch you without tears?"

He straightened. "First of all, those are not tears. The forest air is damp. Second of all, my ultimate goal is not to become a warden, but a Lord Justice."

"Then why are you training to become a warden?" I asked.

"Because that's the career path," he said. "Most justices serve as an agent in the AMF before they join the judicial system. It's simply the means to an end."

The chancellor escorted me to a room in the western building called ‘the bunker,’ where transfer students stayed before they were assigned to a room in the residential wing. The room was clean and sparsely furnished with a bed and a nightstand. It was much better than an alleyway.

"Sleep, child," the chancellor said. "You’ll be safe here. We shall provide more suitable accommodation tomorrow." The door closed behind her with a gentle click.

I stretched out on the bed and stared at the ceiling for the next two hours, my mind whirring. I’d left all my belongings behind. Even my toothbrush. Although I didn’t own much, it was still unsettling to leave behind everything I owned in the world. It would take more than a pair of blue sneakers to make me comfortable here.

When I finally succumbed to sleep, I dreamed of feathers falling from the sky. I didn't know whether they belonged to Icarus or the chancellor's cloak. They drifted to earth like snowflakes, soft and beautiful. I stood on the ground below and watched them dance in the air around me.

The next morning, a knock on the door woke me abruptly. "You awake in there?" an unfamiliar voice shouted.

I bolted upright. "Who's asking?"

"Are you decent? The chancellor says you have no nightclothes, so you either slept in the buff or in the clothes you arrived in. Before I open this door, I’d like to know which it is.”

I stared at the closed door. "I don't sleep naked."

“Good.” The door opened to reveal a stout woman with rosy cheeks. "Nothing wrong with sleeping in the buff, mind you. It's our natural state, after all. I only wanted fair warning.” She examined me closely. "My name’s Hazel Hazeldine,” she said. “I’m Chancellor Tilkin’s secretary. Her right hand, if you fancy those sorts of metaphors. She sent me to fetch you for breakfast."

"Hazel Hazeldine?" I repeated. Who would do that to a child?

The feathers were warm and inviting, and I instinctively snuggled against them. Without warning, it felt like we were falling into an endless void. A swirl of colors dotted the inside of my eyelids and, for a fleeting moment, I wondered whether I’d made the right choice.

"You may open your eyes now," the woman said.

They snapped open, and the first thing I saw was a huge lake in front of me. Massive stone buildings lined the backdrop. I felt like I'd stepped back in time to a medieval village.

"It seems I've brought you home with me," the woman said. "This is Spellslingers Academy of Magic, and I am its chancellor, Lindsey Tilkin. We have much to discuss, Miss…?”

Chancellor Tilkin smiled. "It's a pleasure to meet you, Bryn Morrow. I had been meeting a friend for a late supper. I certainly hadn't expected to run into you. My visits to the human world are generally rather lackluster."

I stared at the stone buildings over her shoulder. “A school for magic?”

Chancellor Tilkin followed my gaze. "That's right. You haven’t heard of us?”

“No need to be sorry,” she replied. “Why don't you come with me and we'll get you settled?"

The moment we stepped between the trees, the light dimmed. A canopy of branches and leaves blocked most of the sunlight. This forest lacked the usual sounds of birdsong and scampering woodland creatures. It was so quiet that the beat of my heart seemed to be the loudest noise here.

Moonlight Junction was only a short ride away on the back of Gray's motorcycle. Once again, the only awkward part was holding tightly to Gray iwthout feeling him up. Those abs made it difficult, though.

"It seems I've brought you home with me." the woman said. "This is Spellslingers Academy of Magic, and I am its chancellor, Lindsey Tilkin. We have much to discuss, Miss...?"

“More coffee, ma’am?” I asked, lifting the half empty pot in my hand.

“Oh, no thank you. Another cup and I’ll have the runs all night,” the older woman replied.

Her husband rolled his eyes. “Myrtle, nobody wants to hear about the inner workings of your digestive system.”

“It’s the outer workings I’m concerned with Henry, or weren’t you listening?” She winked at me. “Fifty years of marriage and he still never listens.”

Across the room, a baby squealed with delight. Henry’s eyes dimmed at the sight of the family. “Bit late for a night out with an infant and a toddler.”

“Now, Henry,” his wife scolded. “It’s not as though it’s a school night. You’ve forgotten what it’s like.”

“They’re celebrating,” I said. “The father just came home from a tour of duty.” While I generally tried to avoid tables with small children, I’d waited on the family of four, and their feelings of joy had been palpable. It seemed he’d missed the birth of the baby and the toddler’s birthday, and was eager to make up for lost time. I didn’t blame him.

Henry grunted in response. “We’ll take the check now, miss.” He paused for a beat. “And theirs, too, if they haven’t paid yet.”

I smiled. “They haven’t. Should I tell them who paid?”

Myrtle laughed lightly. “We’re basically the only ones left. I think they’ll figure it out.”

“I don’t know. I quite like the idea of being a mysterious benefactor,” Henry mused. “I’ve always been a fan of Dickens and—what was that fella’s name in Great Expectations, Myrtle?”

“Oh, a budding literary scholar, are we?” Myrtle queried, leaning forward with interest.

“No, ma’am,” I said. “I was homeschooled, but I read a lot. My mother loved books.” Medicine had been her passion, but books had been a worthy second.

“Homeschooled? Funny, you don’t look like a hippie,” Myrtle said, scrutinizing me. “I thought only hippies homeschooled their young.”