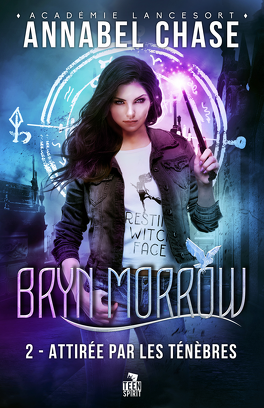 “Nobody told me there would be hellhounds!” I sprinted across the field, trying to focus more on not dying than my annoyance with my roommates. Surely, someone should have felt the need to mention that the hundred-yard dash involved three giant black dogs with burning red eyes and the stench of death. Not exactly the routine exercise I envisioned this morning.

I heard their snarls behind me and pushed myself harder. Forget Jack Frost nipping at my nose. I had the fiery breath of hellhounds at my heels.

“Use magic, Morrow,” the instructor yelled. Theo Armitage was an active Warden of the West, a branch of the Agency of Magical Forces. He doubled as an instructor for trainees at one of the organization’s feeder schools—Spellslingers Academy of Magic. Thanks to Chancellor Tilkin, I was fortunate enough to be offered a permanent place at the academy, although, at this very moment, I was questioning my choices.

“She won’t make it,” Slick McWizard yelled. I couldn’t remember his name, only that he used too much product in his hair.

The goal was to reach the glowing finish line by any means necessary before the hounds caught me. Allegedly, Armitage wanted to see how we’d get ourselves out of a tough situation, although I suspected he took secret joy in putting our feet to the fire—literally. I’d opted for good old-fashioned running. I tended to avoid using my magic and today would be no exception. I had a lifetime of experience stifling my power in the human world to avoid detection by my Lord Voldemort-style father. Now that I knew he was dead, I worried that using too much magic would turn me into him.

My roommate’s warning came too late.

I felt a searing pain on my right heel, so intense that I fell to my knees.

“Down, doggie,” I shouted, flipping onto my butt to face the trio head on. The hounds were bearing down on me. I had no choice.

I yanked my wand from my waistband and took aim. Saliva splattered on my blue cloak, burning tiny holes in the fabric. Before I could act, a ring of fire appeared around me. The hellhounds howled in protest as they skidded to a halt in front of the flames. I glanced over at the responsible party—my roommate, Dani Degraff. The strawberry blond witch tried to look nonchalant, but everyone knew fire was her specialty.

“It’s not your turn, Degraff,” Armitage said, his nostrils flaring in annoyance. “Douse the flames so Morrow can get to the finish line, assuming she’s capable of it.”

Ugh. His obnoxious tone was the worst. Of course, I could make it to the finish line. I just wanted to achieve it without magic. It was impossible now. The hellhounds were pacing the area around me, waiting for their chance to pounce. I rose to my feet and Dani motioned with her wand, extinguishing the ring of fire.

Water was my specialty, but there was no reasonable source to draw from. It was a dry day and we weren’t close enough to Mercer Lake. The closest body of water was the river that flowed through the forest half a mile away. Although I could do it if I really wanted to, I decided to rely on one of my lesser powers.