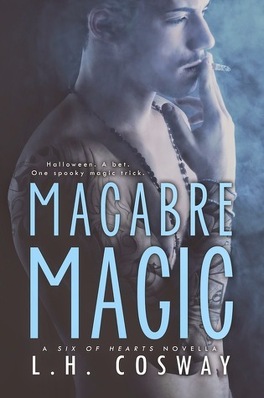 Included in Shiver: 13 Sexy Tales of Humor and Horror.

When you’re married to an illusionist, you never know what surprise is around the corner.

Matilda believes she doesn’t scare easily. Horror films make her laugh rather than jump in terror. Jay begs to differ. With just the right magic trick, he thinks he can give his wife a scare for Halloween, so the two make a bet. Will Jay be able to frighten Matilda, or will Matilda’s immunity to scare tactics win out?

Macabre Magic is a short, fun Halloween read for fans of L.H. Cosway’s Six of Hearts.

Jason’s neighbours’ house was much nicer than his own. At home all he ever heard silence. All he ever felt was the pain of his father’s fists colliding with some part of his bod

One day while outside in their adjoining back gardens, he’d befriended the neighbou prettiest girl he’d ever seen. He liked being around her because she was always smiling and perfect white teeth. He wanted to capture that emotion, steal a little piece of it for him

Sometimes, on the days when his father was away at work, he felt something like h him, Mum, and his brother Jack. He loved them both so much that he felt he would do would laugh and play in the garden, and for a time forget that in just a few hours th brought would return.

He’d been waiting in the old shed in the garden that night, knowing his father ha would likely return home in a temper. Jason planned to stop him this time. He woul power to keep him from hurting his brother and mother, even if it meant taking the beati

To pass the time in the shed, and to keep his mind from the pain he would soon marbles and a deck of playing cards, practicing various tricks he’d made up. He alway people, seeing the look of wonder on their faces as he dazzled them with his skills