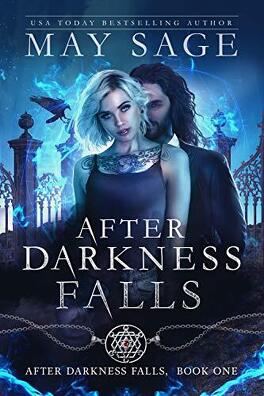 Just because a piece of advice was given by a serial killer didn’t necessarily mean that it was wrong.

Chloe’s father used to say, “If your day sucks, concentrate on one thing you can look forward to, and you’ll get through it.” At the time, she hadn’t known that he’d been distracting himself from his dreary routine by imagining what torture he’d administer to the victims he kept locked in the storm cellar, but still. Great advice.

She put it into practice, trying to forget why she was on a plane for the first time in her life and focusing on new experiences, and the destination. She managed a smile. Seven years ago, she might have even broken into a victory dance. Now, at twenty-five, after working her ass off night and day to pay the bills, a smile was all she had.

She'd changed. Not all of it was for the worse. Chloe was mature enough to recognize that she'd been self-centered in her teens; otherwise, she would have noted the strange things—the smells, the disappearances, the odd noises that didn't quite sound like they’d come from a TV. But she'd been too busy studying in her room, music blasting in her earphones, to care about what her father was doing.

Her world imploded in so many ways. With a father arrested, and then convicted as a serial killer, she never had a chance. The colleges that had shown some interest in her were all quick to dispatch rejection letters. None of her personal achievements had mattered in the end. Grades, chess, track, debate clubs—all had been for naught. She was George Miller's daughter, and that was that. The name stuck to her skin like a bad scent.

Her brother disappeared that same year. She couldn't really blame him. She also would have poofed into thin air, if she'd known how. Instead, Chloe had to grow up fast. She sold the house, sending all the profits to the victims’ families to pay for their funerals and everything else they had to deal with in the aftermath. That hadn’t stopped them from sending insults and threats, but they kept the money, and hopefully it helped. Then, Chloe left Colorado with her beat-up Beetle, her old cat, and a backpack in the trunk. Fast-forward seven years, and she was doing okay.

But okay had never been her aspiration.

Chloe soon found out that some people were more understanding than others. While humans—regular humans like her—weren’t entirely welcoming to the daughter of a cannibalistic murderer, sups didn't seem to care.

Since the Age of Blood, when the supernaturals had announced their existence to the world, they'd mostly kept to themselves, living in gated, tight-knit communities, but occasionally, someone who didn't fit in joined the regular human world. In her travels, Chloe met some shifters, mostly loners. They were a little unsettling at first, but she soon started to seek them out purposely. She preferred their company to the judgmental people who blamed her for someone else's sins. Sups entirely shrugged off her history.

They all had a horrific story about an uncle, cousin, or sister who'd gone rogue. Among sups, all that mattered was your own actions.

"One of my brothers went feral. He tried to eat my da'. We hunted him down, though."

Some people said sups disliked regulars, pushed them away. From Chloe’s experience, they just stayed away from assholes. She had no fur, no claws, no sharp teeth, and they'd been welcoming enough.

It was no wonder that the first time she’d settled down someplace for an extended period, she'd ended up working in a bar owned by a vampire and frequented by supernatural creatures.

Chloe was incredibly grateful for the chain of events that had led her to her place of employment. If not for her boss, Charles, she would be dead by now.

She didn't know why it had taken so long, but someone had finally placed a hit on her, and now thugs were trying to hurt her.