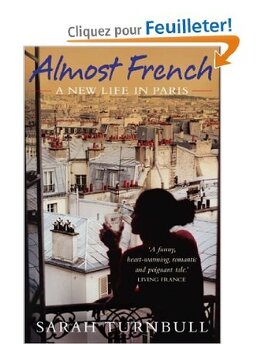 I didn't want to gloss over the cultural clashes..."

Despite having failed French in her first year at university, Sarah Turnbull moved to this country from Sydney in the mid-'90s after falling in love with a "very French Frenchman." Her new book, "Almost French," recounts the charming, true story of a young Australian's odyssey, "navigating" the highs and lows of Parisian life.

Most books on France fall into one of two categories - light stories about renovating houses in the countryside or more serious and informative journalistic, books on French issues. This one opts for an alternative, intimate approach. "I felt there was a niche for a fun, readable story that also offers insights and some analysis into this country and culture," says Turnbull. "I wanted my book to be really honest - I didn't want to gloss over the cultural clashes and difficulties that many foreigners encounter here."

When asked how she came up with the book's provocative title, she said - "It's tongue-in-cheek. It sums up the main theme... expatriates' struggle with identity and their sense of belonging. On the one hand, after eight years in France, I've adopted some French customs and I've been very influenced by French ways of thinking. Yet I don't feel French at all and I know I never will. If anything, as each year passes I feel more Australian. This permanent state of only ever being ‘almost' French - never ‘entirely' or ‘completely' - is really the essence of my book."

Is Turnbull beginning to feel "at home" here? "In France, I still feel like an outsider - my accent screams out ‘Foreigner!' - but back in Australia I also feel a bit of an outsider now too. While I've been over here, friends have married and had babies, new faces have appeared on TV, new governments have taken charge and I haven't been there to witness these changes, to share these occasions. It's telling that when I'm in France I call Australia ‘home.' Yet, when I'm back in Sydney, ‘home' is my Paris apartment, my quartier, the gray rooftops."

In her book, Turnbull shares further hard-earned insights. "The French have a completely different notion of time - friendships here often take years to form. Gradually my misapprehension has been replaced by an understanding and deepening affection for my adopted home. Learning to interpret cultural nuances marks a turning point for any expatriate. This doesn't mean you necessarily appreciate all the differences but it does allow you to drop your emotional baggage, the hurt and confusion."

With the current climate of anti-French sentiments being stirred up in some countries, it's encouraging to find a publication that lends itself to cross-cultural communication. "I'm thrilled if my book can, in some small way, help promote understanding. That's not to say my view of France is blinkered. There are things here that still drive me to distraction, aspects of my own culture I miss terribly. But, I am here by choice, because I love it, and I consider myself extremely lucky!"