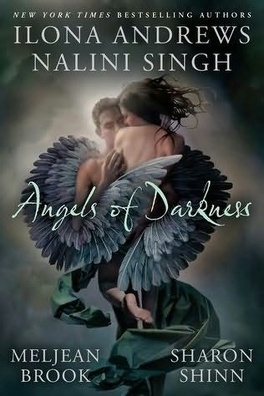 They soar through the night, unearthly creatures of legends and lore. Four masters of urban fantasy and paranormal romance explore the rapture of the heavens above, and the darkness below in four all-new stories of angels and guardians, and good and evil.

Angel's Wolf by Nalini Singh — In the spellbinding universe of the Guild Hunters, a vampire becomes obsessed with the seductive angel who rules the Louisiana territory. But in her court, all is not what it appears to be.

Alphas: Origins by Ilona Andrews — A woman is kidnapped into a world divided by a superhuman civil war. As the captive of an irresistibly dangerous male, she has two choices: submit and become a pawn, or take hold of her own destiny.

Nocturne by Sharon Shinn — Accepting a position in a secluded and whispered-about mansion, a woman soon discovers the source of its mystery: the blind, tormented angel who lives there, and whose secrets could now destroy them both.

Ascension by Meljean Brook — When vampires disappear from a community he's protecting, a world-weary Guardian doesn't know what evil he's hunting, but he'd rather hunt alone than accept help from his ex-lover and fellow Guardian, Radha. But Radha refuses to leave him, because she's determined not just to help him save the community...but to save him.

“Her life was broken like a mirror and the shards kept cutting her fingers.”