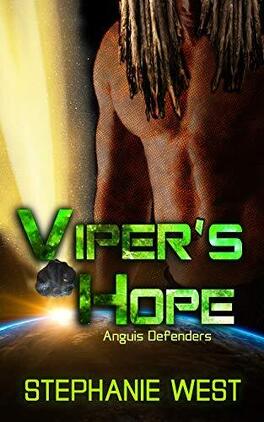 Hope covered her ringing ears as she stared wide-eyed at the molten rock strafing across the sky. It got larger and brighter with the smoke trail parting the horizon. The sudden eruption of water out at sea was cataclysmic when the meteor struck. The wave of water that barreled toward San Francisco a moment later was small at first, then grew in size. Hope watched aghast as the water pushed aside massive buildings. She couldn't begin to fathom the level of devastation in front of her.

As if the tragedy she'd witnessed wasn't enough, something lurked in the trees outside her campsite. She watched as a portion of the tree separated from the trunk. The colors morphed into a bronzed, earthy tan figure of a man. The camouflaged man was at least seven foot tall with well-built legs and a massive broad chest. He swayed hypnotically as he walked with the sleekness of a predator. His facial features were not human, yet not altogether frightening. He was an alien, a giant freaking alien, and he was abducting her!

Before the scourge of the universe struck, Viper never aspired to do more than rule his people, but his entire life had changed in the blink of an eye. The tragedy galvanized him with a single-minded purpose, to see to it he defended the Anguis and any other race unfortunate enough to cross paths with the plague, and wipe it from existence.

Finding his mate was the farthest thing from Viper’s mind as he attempted to rescue the humans off the doomed planet. With his own planet in turmoil over aiding so many other species and the universe at risk from the catastrophic plague, Viper never expected to find Hope.

Oh God, they found me. I'm being drugged, she realized with mounting fear.

"Not again!" she cried out.