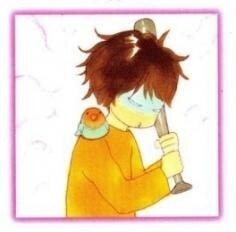 Following his beloved grandfather's death, freshman Daisuke Ootaka is about to start life at Torioka University a few days late. But Ootaka, who joined Torioka for his grandfather's sake, already regrets his choice.

Then at the station, he is greeted by - of all things - a sign with his name on it, carried by the pint-sized Suzume Morino (nickname Chun), captain of the baseball team!

A most reluctant Ootaka joins the baseball team and finds himself living together with Chun! The little rogue Chun is about to show his true colors!

Prequel of Fukurou-kun to Kare!

Ever since Hidetoshi told his best friend Kengo that he was gay at graduation, and Kengo responded with "we'll always be friends no matter what,” Hidetoshi was determined to keep things that way. Though Kengo realized that Hidetoshi probably wanted to confess to him, he keeps his mouth shut in fear of ruining their relationship. But when Hidetoshi gets involved with an abusive boyfriend, Kengo feels that he can no longer just sit back and watch…

A spin-off of the series Ashita no Kimi wa Koko ni Inai, which involved Mio-san's brother.

Inusaki Nozomi has a secret power, but it’s not a very useful one. In fact, it’s downright annoying: he can talk to birds. In between doing odd jobs for those around him, he has to listen to the constant chatter of the gossiping sparrows outside of his window or the endless bickering of the pigeons in the park. He’s just about at his wits’ end with this unlucky power, when he encounters a crow–who for some reason knows his name.

After failing Japanaese history, Mio was force to go to extra cram classes. Finding out that his Japanese history teacher, Fumichika, was quite understanding and kind, Mio couldn't help but feel an attraction towards him. After he confessed, Fumichika tells him that his feelings won't last, but if he can accept the risk of not having his feelings reciprocated and the fact that he may end up hurt, they can start a physical relationship. But when Mio desires more...

This spring, Tokyo TV’s newly employed announcer Fukuro was given the task to gather information and do a close report on the infamous hunk of the professional baseball world: Shiratori Reiichi. Given this important opportunity Fukuro is determined to do his best!

A few days ago, non-fiction writer Katsuragi Shiho came to see Shikibu Takeru at his office in Tokyo. She gave him the key to his apartment and asked him to take care of her things if she did not return from her trip in 3 days. Unfortunately, she did not return in 3 days, nor in 4. Even more mysteriously, nobody seemed to know where she had even gone. Worried, Takeru dug deeper and eventually found 2 witnesses that said they saw Shiho and another woman who looked her age ride the ferry to "Island Kokushi" near Kumamoto. Takeru sets off to try to find her there, but what awaits him is a strange island where nothing is what it seems. In a place haunted with old tradition, a strange religion, and several mysterious deaths, can Takeru find what really happened to his friend?

4) The Wealthiness of Poverty

Soon after being cruelly dumped by his boyfriend, Natsuhiko finds himself going out with a super hot, wealthy businessman! Somewhere in the back of his head, Natsu is always wondering if Kuramoto really likes him, or is just playing a trick on him. One day, Natsu is walking through a train station and hears a street performer who sounds a lot like Kuramoto, so he invites his boyfriend to go see the singer... but Kuramoto just starts apologizing?! What for??

Its hard to move on when you are still in love with your childhood friend. What happens when you meet up again after 13 years.

Takashi is haunted at night by visions of a woman begging for her child not to be taken away. He sometimes sees strange shadows outside his window, but tries his best to simply ignore them. As his seventeenth birthday approaches, the shadow becomes more and more clear, and the vision more vivid. Slowly, the once kind and caring Takashi becomes indifferent, and eventually cold and biting towards everyone around him. What does this sudden change in attitude have to do with his seventeenth birthday?