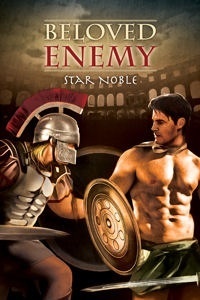 At the edge of the Roman Empire, Cheruscans Kjeld and Dafried forged the bonds of childhood friendship, playing and hunting together along the mighty Rhine—until Romans ripped Kjeld away from his idyllic life and best friend to live as a Roman soldier.

That was ten years ago. Kjeld, now a Roman general, returns to his foster parents to prepare for a glorious celebration: a battle in the Coliseum. What he doesn’t know is that Dafried, after being captured during an assault on Roman military post, now trains as a gladiator in preparation for the upcoming competition. When the childhood friends reunite in the sands, it could spell death for one of them.

A Timeless Dreams title: While reaction to same-sex relationships throughout time and across cultures has not always been positive, these stories celebrate M/M love in a manner that may address, minimize, or ignore historical stigma.