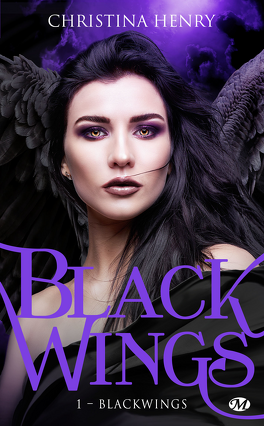 I DRESSED, PULLING ON A PAIR OF FADED BLUE JEANS, a long-sleeved black T-shirt, and a pair of ankle-high black leather boots with chunky treads. My wardrobe mostly consists of jeans, cords, black tops and black shoes. I don’t want to have to think about coordinating anything, so it’s best if all of my clothes are already coordinated when they come out of the closet. Besides, what color is more appropriate for an Agent of death than black?

I had a soul to pick up at ten forty-three P.M. tomorrow—James Takahashi at the corner of Clark and Belmont. Other than that, I had the next couple of days completely free. Free except for a few niggling little details—like running a credit and background check on Gabriel Angeloscuro, finishing up the recipes for the article on pears that I was writing for a magazine that featured low-fat cooking, checking the Hall of Records for the whereabouts of Patrick’s soul, and finding my mother’s killer. Just an ordinary day’s work.

I contacted Charlie McGivney, the P.I. who’d agreed to handle the background checks for me. I read him Gabriel’s information from the apartment application. The application was written in a freakishly neat print, almost like a typewriter. Charlie said he’d get back to me in a day or so. One task down.

I yanked on my black peacoat and called to Beezle, who was doing his broody thing on the mantelpiece again. “I’m going to see J.B.”

“What for?” he grumbled.

“So I can find out what happened to Patrick,” I said. “I need a pass from him to get into the Hall of Records.”

“Yes, you do,” Beezle insisted.

“No, I don’t. I just find him to be a little smug. And condescending. And annoying.”

“That, too,” I said as I stepped to the side window and thought about going to the Main Office. As I pictured the building, my wings sprouted from my back.

I wasn’t really sure how I would convince J.B. to give me a pass to the Hall. We hadn’t exactly ended our conversation on a high note the day before. And in addition to all of my other worries, I was still bothered by the fact that he seemed to have at least one Agent under surveillance. Something else to add to my to-do list.

Lizzie frowned at me when I walked into J.B.’s office. “Do you have an appointment, Maddy?”

“No, but I’m sure that he will relish the opportunity to shout at me for no apparent reason.”

“Maddy,” she chided. Lizzie was maybe ten years older than me, and she tended to use every one of those years as an excuse to act vaguely maternal. “You shouldn’t talk that way about Mr. Bennett. He is your supervisor.”

“Okay, okay,” I said, holding up my hands in surrender. After all, I wasn’t there to give Lizzie a hard time. “Is he in?”

“I’m sure he can see you,” she said, and announced my presence over the intercom.

I tried to put on my nice face. I needed something from J.B., and I wasn’t going to get it from him by giving him an attitude. But then he ruined everything by acting like J.B.

“I noticed that you haven’t filed your paperwork for the Luccardi incident yet,” he said before I had even finished shutting his office door.

Paperwork, I thought. I’ll take that paperwork and shove it up your . . .

I took a deep breath to clear my head. No use letting him make me angry.

“Patrick is dead, J.B., and I need a pass to get into the Hall of Records.” I hoped that I looked contrite and harmless instead of annoyed and murderous, which was how I generally felt in J.B.’s presence.

“You know you don’t have the authorization to go poking around in there. What the hell are you talking about?”

“Patrick? You know, Patrick Walker? My friend, one of the Agents under your supervision? He was murdered by some big scary thing last night at Ravenswood and Grace. I want to find out what choice he made. If he’s wandering the Earth, I need to talk to him about the monster that killed him.”

He stared at me dumbly. “Are you taking drugs, Black?”

Death is just another bureaucracy, and in a bureaucracy so large, sometimes people fall through the cracks. There are plenty of reasons why people don't get an Agented escort to the Door, and they don't all have to do with kitty love. If a person suffers a violent death, they may leave their body involuntary - snap the tether that binds them to their mortal self and flee in anguish and madness before an Agent arrives. Sometimes a soul will allow itself to be untethered, come along quietly and the break away from the Agent before they arrive at the Door, fearful of what lies behind it.

Sometimes an Agent is hurt or killed and that person's list may lie dormant for an hour or two until replacements are notified. If that happens, the window of opportunity may close - souls might break their own tethers and wander free, or just refuse to be escorted, like Mrs. Luccardi.

Any of these possibilities creates ghosts, souls that will pas through the Door. Ghosts have an annoying way of begetting other ghosts, showing up when an Agent is trying to work and convincing the confused deceased that they're better off haunting this mortal coil than their chances with the Door.

The thing is, you can't force a soul to be untethered and escorted. The soul has to choose the Door. Like so many mystical things, three si the key number. If the soul is asked three times and refuses the Door, then the Agent metaphorically wipes his hands and the soul becomes a ghost. The Agent is magically bound to leave them alone.

I hate it when a soul goes all stubborn on me. It doesn't happen as often as you'd think. Most people understand that they're dead and want to move on. Maybe it's because they think Heaven is waiting for them. Maybe it's because they believe they'll be reincarnated as the Princess of Monaco anymore? Maybe it's because they're just tired of this world. When i show up to escort them to the Door, they know why I'm there and they're ready to go. But sometimes, like today, a soul doesn't want to leave its earthly body.