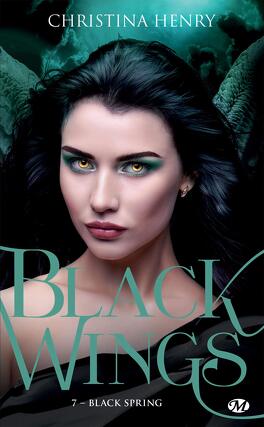 I woke to the sound of dogs barking. My eyes open halfway, just enough to register the sun streaming through the open blinds. Nathaniel's arm was thrown around my waist, his body snuggled into my back. The child inside my belly shifted under his hand. The scent of bacon cooking drifted from the kitchen.

My three dogs, Lock, Stock and Barrel, nosed inside the bedroom door, their nails clicking across the hardwood floor. They came around to my side of the bed, their doggy faces set in mute appeal, tongues lolling.

It seemed like a pretty typical domestic scene, except that is nothing typical about my life. The dogs weren't dogs at all, but Retrieves - powerful magical creatures who'd given me their allegiance when I'd freed them slavery to the Agency.

The man in bed with me wasn't a man, but he son of an angel and a... Well, I wasn't sure exactly what Puck was, but he definitely something old and powerful. Besides his lack of humanity, Nathaniel also wasn't the father fo my child. He wasn't even my lover, or my boyfriend. I didn't know how to define our relationship status as any other way except 'complicated'.

The person cooking the bacon in the kitchen was my many-greats-uncle Daharan, brother of Lucifer, dragon shapeshifter, creature of fire and something older than the Earth itself.

As for me, I was the daughter of a fallen angel and an Agent of Death. Lucifer was my grandfather. My baby had the blood of a half nephilium inside his veins, a legacy from his dead father. I had more enemies tried to kill me and my very ancient family members plotted around me.

We were definitely not going to win any awards for normality in the family.