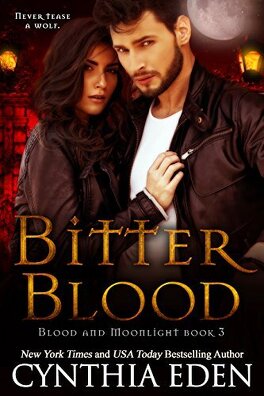 Some bonds go deeper than blood…they go to the very soul.

New Orleans detective Jane Hart is a vampire. She craves blood, has supernatural strength, and when the mood hits her just right, she can grow one killer pair of fangs. She never counted on being a vamp, but she also never counted on falling hard for werewolf alpha Aidan Locke. Now she’s mated to the wolf, and even though she’s living the undead life, Aidan refuses to leave her side.

But Jane is being watched, hunted…tested. And each deadly test that she faces puts Jane—and the people she loves—in the path of a determined killer. She has to find out who is setting her up, before it’s too late. Too late for Jane. Too late for Aidan.

He claimed her…and she obsessed him.

Because now her lover is the one who is changing. Jane’s blood has infected Aidan and the wolf that lives within him is fighting for survival. Each battle…each dark test that their enemy puts in their path…each move slides Aidan closer to the edge. A darkness is growing inside of him. A darkness that is slowly consuming the man he’s been…

And leaving only the monster behind.

When blood and darkness rule, even mates can be torn apart.

In the final book of the BLOOD AND MOONLIGHT trilogy, Jane and Aidan will find out who they can really trust…and who has been waiting to destroy them all along. Are you ready for the end?

The scent of blood hit her—sweet and tempting—and New Orleans Police Detective Mary Jane—just Jane—Hart clenched her teeth as she rushed toward the yawning mouth of a nearby alley. She also prayed that her new fangs wouldn’t decide to burst out right then and there…because that would be bad, very, very bad.

The victim ran toward her and yelled, “He stabbed me! The crazy bastard stabbed me!”

The bleeding victim was young, probably in his early twenties, with bright blond hair and blue eyes. It was dark right then, well after midnight, and the alley was nearly black, but Jane could still see him perfectly.

At least there was one benefit to being a vampire. Excellent night vision.

But that guy is getting way too close to me. Her teeth were aching because the coppery scent of blood flooded her nostrils. “Stop!” Jane ordered as she lifted a hand. “I’m a cop!”

He staggered to a stop. “I need a freaking ambulance!”

Yes, he did. But if he kept coming at her, he was going to get bitten. She didn’t like human blood. Actually, she couldn’t keep it down at all, but her vamp instincts were still kicking in with a vengeance. When fresh blood came running right up to you, well, it was hard to resist a bite.

“Just stay there,” Jane gritted out.

She looked over her shoulder. She’d been walking the street alone, trying to get her damn thoughts together. She wasn’t even on the clock that night. But, no, of course, she would have run into a bloody victim. That was her luck, right?

And helping him is my job, whether I’m on the clock or not. I might be undead now, but I’m still a detective.

“Where is your attacker?” She inched deeper into the alley. Her gun was holstered at her side. With her new vamp strength, she didn’t even need it anymore. Not really.

“B-back there…” His voice stuttered as he glanced over his shoulder. The blood had soaked through his coat.

Her eyes narrowed. The alley was only about six feet wide, but it was long, stretching between the old buildings. She didn’t see anyone back there but…

I can hear him. The faintest rustle of footsteps. The perp was probably hiding, just out of sight. Waiting.

Jane determinedly marched toward her victim. “It’s going to be all right.” Going closer to him meant the smell of that tempting blood just got stronger. Human blood makes you gag. Remember that. It may smell like candy, but you can’t handle that crap. Her gaze slid over him. The blood was all coming from his right shoulder. A stab wound? “The wound isn’t that deep. You’re going to be all right.” A few stitches and he’d be good as new. Provided she got him out of that alley and away from the attacker who could spring again at any moment. “Just stay behind me.” She slid past him and—

“Bitch,” the blond victim whispered. “I know what you are.”

She whirled back to face him.

Too late, she saw him reaching into his coat. The guy didn’t look so scared and hurt any longer. His face was twisted with hate and he was—oh, hell, he was yanking a wooden stake out of his coat!

And she heard the fast rush of footsteps coming from the back of that alley. The guy that she’d thought was the attacker—hell, he must be working with the blond male.

I’m their target. I’m the victim.