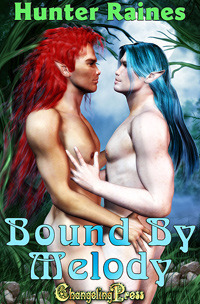 Having just been evicted for what his landlord calls "immoral and unnatural carnal acts," Gilrain is forced to move into the first elf-friendly building he finds -- even if that means renting a basement apartment that has more in common with a cellar than a penthouse.

Still, a change of scenery is just what Gil needs. He's still not sure whether what he experienced the previous night was a dream or a real encounter. What he does know is that he woke with bruises, love bites, kiss-swollen lips... and an eviction notice on his door.

But when the first night in his new apartment brings strands of a spectral song drifting from beneath the ground straight into his bedroom, Gil realizes he'll find no rest here. He recognizes an elf binding when he feels one, but he won't be taken against his will.

So what will Gil do when he learns he's the only one who can grant a wounded elf a second chance... or condemn him to everlasting damnation?