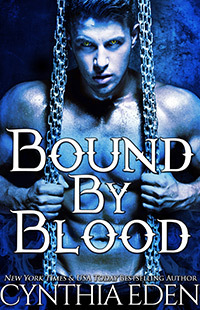 Vampires and werewolves have been blood enemies for centuries, but now a new threat is rising...demons are escaping from hell and those demons are intent on wiping out both the vamps and the werewolves.

In order to stop the demons, pureblood vampire princess Morgan LaBeaux agrees to the treaty offered by werewolf alpha Jace Vaughn. She'll mate with him, share her blood with him...and in return, the wolves will aid the vampires in this battle.

But Morgan doesn’t realize just how dangerous the wolves can truly be. Jace has been waiting years to claim her. He’s set a trap for his princess, and now that he has her, Jace doesn’t plan to let her go. He’ll send the demons back to hell, and he’ll keep his vampiress—forever.

Warning: This novella is a sexy paranormal romance. As such, it contains vampires, werewolves, and demons--oh, my! It also contains hot sex and adult language. You have been warned!