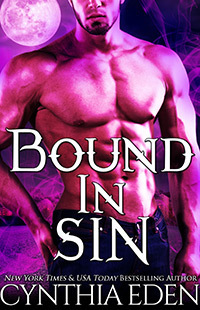 What’s the price of sin?

Human Paige Sloan once loved werewolf Drake Wyler more than life, but then that life was taken away from her. Attacked by vampires, Paige was bitten, and, on a cold, dark night, the life she’d known ended. She was reborn as a vampire—a werewolf’s deadliest enemy.

Paige ran from the vampires who attacked her, and she ran away from her lover. She didn’t want Drake to know what she’d become, and she didn’t want to face the fury of his pack. But a girl can only run for so long until the past catches up with her.

Some sins mark your soul.

When Paige learns that Drake is being targeted for death, she knows that she can’t hide in the shadows any longer. She has to return to him, and she will do anything—anything—in order to make sure that he keeps living. The vampires might have destroyed her chance to live and love Drake, but they won’t take him. Not over her undead body. She’ll slay them all…and maybe, just maybe…she’ll even have the chance to sin—one more time--with the werewolf who’d marked her as his mate.

Some sins are worth dying for…