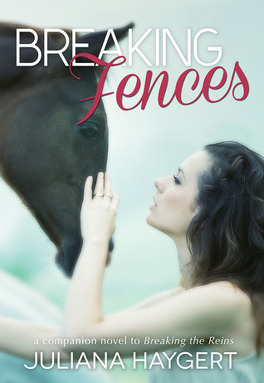 All Beatriz “Bia” Fernandes wants is to prove herself—to her family and friends—though it’s hard to prove anything with an overbearing father and three famous polo-playing older brothers. After her acceptance into college results in a heated family argument, the Brazilian girl leaves everything behind to find her own American dream.

College life away from home is perfect until the people she believes to be her friends turn on her. With lies and rumors threatening to suffocate her, Bia turns to her only freedom. Riding.

But one thing gets in the way of her escape. Garrett Blackwell and his bad cowboy attitude. Working at the ranch is his obligation, bugging Bia is his newfound hobby. His thick skin and easy grin don’t hide what Bia already knows—this misunderstood and lonely cowboy fights his own demons. Brushing horses’ coats and mucking out stalls shouldn’t be this sexy, and it isn’t long before he becomes a part of her distraction.

However, escaping won’t solve her problems, and it’s up to Bia to break down the fences around her and prove her strength—not to her family and friends, but to herself … and for Garrett. Because standing on her own doesn’t have to mean standing alone.

Tom was working on untacking the horses, while Carl hosed them down, and another man brought the tack inside the stables. Eyeing Midnight Dream, I dismounted close to them, and started unbuckling Pepper’s saddle. If they let me, I would do it all myself. Midnight saw me and slowly approached me. He poked my back with his muzzle while I unstrapped Pepper’s saddle.

“You want to play, big boy?” He poked me again, nickering. I laughed.

The trainer came out of the stables, and I froze with the saddle in my arms. Midnight Dream shot away from me, and not having seen or recognized me, the trainer chased after the horse for a couple of minutes until he finally caught his reins.

The trainer turned to bring the horse to the stables and halted, his eyes on me.

“What are you doing here?” Garrett asked. His brows knotted in a deep frown.

I forced myself to move and set the saddle on the fence rail. “Riding.” I kicked my foot in the air, showing off my black and white cowboy boots. “Did you think these were just for show?” I picked up a hose. “And you’re a trainer here?”

Without acknowledging my question, he led the horse inside.

I hosed Pepper off and she nickered in delight.

A moment later, Garrett was by my side. He took the hose from me. “I’m an instructor, a trail guide, a trainer, caretaker, handyman, and everything else in between.” He washed Pepper’s hot coat. “I work here full time.”

“Of all the places I could have chosen to ride,” I whispered, taking a step back. Which wasn’t true. There weren’t that many places around.

He finished hosing Pepper, and then pulled her inside the stable. I followed, but only because I had to go through it to reach the parking lot on the other side. However, with Garrett walking right in front of me, it was hard to focus on anything else. He wore fitted blue jeans, a gray T-shirt that showed a hint of the muscles under it, his brown boots, and hat. There was a small stain of sweat right between his shoulder blades, and I wondered if I could get close enough to sniff him. Not that I liked sweat per se, but a hot guy sweating from hard work? Add that to a great natural scent and I was done for.

Garrett opened a stall and put Pepper in. He closed the door and picked up a bucket of water for her. I leaned over the door and caressed her long neck.

“Thanks for the ride, girl. I needed it.”

I turned and found Garrett right behind me. He stared at me with those hazel eyes, and I wondered what was going on in his mind. He probably had heard about the lies Audrey and Sarah were spreading about me. I wouldn’t be surprised if he believed them. Everyone on campus, except for Phoebe, believed them. What could I do? I seemed to have “Brazilian Slut” stamped on my forehead.

“I … I should go.” I turned to the door as the girl sauntered out of the tack room.

She flipped her long, blond hair back and looked me up and down with disinterest before shifting her gaze to Garrett. “Am I dismissed?”

“Yes, Delilah,” Garrett said, walking around me to meet her.

The girl, who couldn’t be older than eighteen, stopped by Midnight Dream’s stall. “Goodbye, M.D.” She reached her hand inside, but the horse retreated.

“Hey, if it isn’t the Brazilian girl,” Jonah’s voice filled the air, and I turned toward it. He was entering the stable. “What a nice surprise.”