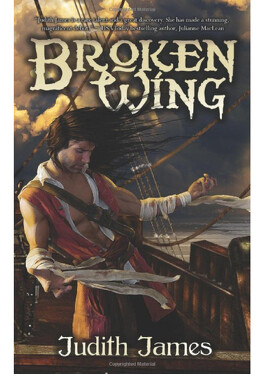 “You followed me, mignonne?”

“No, Gabriel. I felt like a stroll and a quick dip in my bedclothes on a freezing night. Of course, I followed you, you dolt! You're lucky you didn't break your neck coming down here drunk as a—”

“You frightened me,” she said simply. “I didn't like the way you looked, as if you were lost, not really there. I was worried about you. I also wanted to apologize. I had no right to pry, Gabe. I keep saying I'm going to stop, yet somehow I never do. I am sorry.”

“Don't,” he pleaded. “Please, Sarah, don't... I ...” he struggled to find words, to let her know how grateful he was that she'd cared enough to come after him. No one, except Jamie, had ever given a damn if he lived or died. It meant everything. Sarah squeezed his hand, then wound her arm through his and pulled him closer. “You're shivering. Let's get you back before you catch your death.” Leaning into him, she tried to share what little warmth she had. She could feel the rapid beat of his heart, the blood pulsing through his arm, vibrant and alive, but his skin was clammy and cold. He smelled of wind and sea and she wanted to kiss him, to slap and shake him. Impulsively, she stopped and flung her arms around his neck, pulling his head down into a scorching kiss, before pushing him away. “Fool! Idiot! Stupid, stupid man! What were you thinking? Don't ever frighten me that way again! Promise me!”

“I promise,” he whispered, soft against her lips.

What had he expected, that she'd welcome him? He'd known she'd be disgusted, but it wounded him, nonetheless. Well, he'd come for a kiss, and a kiss he'd have. Pulling her roughly beneath him, he held her hands above her head and plundered her mouth, claiming the prize he'd come for. Letting her go abruptly, he sat up, his back to her, and fought to master himself. He knew he should apologize. He knew he should leave. But at that moment, he was afraid to look at her and he was incapable of speech. They sat there for what seemed an eternity, lost in a sea of silence.

Finally she spoke, “One would think, with all your vast experience, you would make a better job of it.”

He turned to look at her, and replied with a voice as cool as her own. “This is the second time you've complained of my kisses, mignonne. I shall be certain not to trouble you with them again.” Rising from the bed, he moved toward the balcony, hesitated, and turned instead to sprawl on the window seat. Reaching for the wine flask, he took a swallow, grimaced, and leaned back tiredly, resting his head against the wall. She was still talking to him at least. He might as well wait until she threw him out.

Sarah noted with some satisfaction that this time he hadn't run away. She decided to reward him. “It wasn't the kiss I objected to, Gabriel. It was the manner in which it was delivered.”

“What do you expect, mignonne? I am a prostitute, though we both choose to forget it at times.”

“You were one,” she allowed. “What does that have to do with it?” He lifted his gaze to hers, overwhelmed by her innocence and saddened at the enormity of the gulf between them. “I am very fluent when it comes to sex, my dear, believe me.” Looking away, he continued, “But kissing, well, it's something that lovers do, sweethearts, husbands and wives, not whores and their clients. It's far too intimate and personal, you see.” He glanced her way again, with a hint of a smile. “You are, in fact, mignonne, the only woman I have ever kissed. I trust it was memorable at least. My apologies, mademoiselle,” he sketched a mocking bow, “for botching the job.”

Something sweet and painful pierced her breast. She looked at him, dissolute, debauched, and achingly beautiful. Vulnerable and alone, he challenged her with his humor and his pride. She thought him magnificent. Tears welled at the back of her eyes and she fought to contain them. He wouldn't appreciate her pity. “I'm honored,” she said, ignoring his mockery.

Gabriel watched with puzzlement, then mounting alarm, as she threw back the covers and made her way across the icy floor, stopping an arm's length away. She reached out her fingers, lighdy touching his jaw, and he hissed on indrawn breath. “Don't, mignonne,” he pleaded. He grasped her hand gently, pushing it away. “No, Sarah,” he whispered hoarsely.

“Then how will you learn to kiss me properly?” she coaxed.

He had promised to love, honor, and protect her; but that promise had been made by someone else.

All he could do for her now was protect her from the man he'd become. He couldn't afford anything soft, anywhere inside him. He pushed her firmly from his thoughts.

All I know of loving, wanting or need, begins and ends with you.

He wanted her, even though he was so sated and weary of sex that he usually had to distance himself from his body in order to allow any arousal at all. He wanted her badly, in ways he'd never expected, and he hated her for it. “You can stop following me. You act like a bitch in heat,” he grated, suddenly incensed. Seizing her wrist in one hand and her throat with the other, he pinned her body hard against the wall with his own, grinding his hips, his throbbing cock hard against her stomach.

“Is this what you want, mignonne?” She stood rigid, shocked, gasping for breath. Realizing he held her by the throat, he moved his hand to grasp her jaw, forcing her mouth to his in a brutal, passion-less, punishing kiss. “It is what you want. You're no different from the others. I can smell it.” Leaning into her, he loosened his grip and whispered in her ear, “I'm a whore, dearling, and you're certainly paying me well enough. I'm as skilled at pleasing a woman as I am at pleasing a man.

Some say better.” He teased her lobe with hot breath and fluttering tongue. “Are you wet for me, mignonne? Shall I show you what pleasure truly means?” Forcing her hand down, he rubbed it against the bulge in his breeches, stifling a groan. “I'm ready for you, chere. Feel me,” he crooned.

“Shall we go to my room, or yours? Or perhaps right here, with your brothers just a shout away.

Does that excite you?”