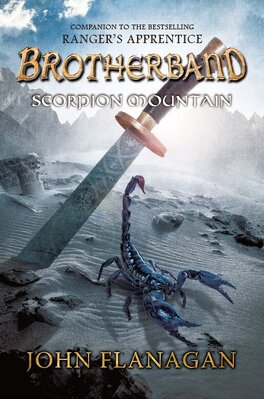 Fresh off of victory over their longtime nemesis, Tursgud, Hal and the Herons, summoned by King Duncan, set sail for Castle Araluen. Thrust into the dangerous world of Araluen, the Herons learn of a threat to Queen Evanlyn and whispers of a deadly sect known as the Scorpion Cult. Rumors say that Iqbal, who previously tried to assassinate Evanlyn at her wedding to Horace, might be planning another attempt. Not waiting to see if the knife will strike true, the Herons join forces with Gilan and his fellow Rangers to track down the would-be assassins.

In this fifth book in the Brotherband Chronicles, old friends re-emerge to take on new enemies as the worlds of Ranger’s Apprentice and Brotherband join forces! Perfect for fans of J.R.R. Tolkien’s Lord of the Rings, T.H. White’s The Sword in the Stone, Christopher Paolini’s Eragon series, and George R. R. Martin’s Game of Thrones / A Song of Ice and Fire series.