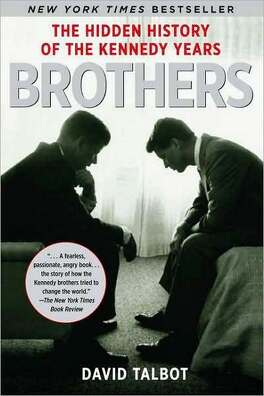 'A new perspective... the work of a fine investigtive journalist' The Times

For decades, books about John or Robert Kennedy have woven either a shimmering tale of Camelot gallantry or a tawdry story of runaway ambition and reckless personal behaviour. But the real story of the Kennedys in the 1960s has long been submerged - until now. In Brothers: A Hidden History of the Kennedy Years, David Talbot sheds dramatic new light on the tumultuous inner life of the Kennedy presidency and its stunning aftermath.

Based on interviews with more than 150 people - including many of the Kennedys' own 'band of brothers' - as well as newly released government documents, Brothers tells the compelling, untold story of the Kennedy years, including JFK's heroic efforts to keep the country out of cataclysmic war and Bobby Kennedy's secret quest to solve his beloved brother's murder.

Meticulously researched and movingly told, Brothers is a sprawling narrative about the clash of powerful men and the darker side of the Cold War - a tale of tragic grandeur that is certain to change our understanding of the relentlessly fascinating Kennedy saga.

'Talbot's new account shades in details that other biographers have missed thanks to declassified documents and his choice of interviewees. His revelations show the extent to which the Kennedy administration was plotted against by its own national security apparatus, and the clandestine motives behind the Bay of Pigs' Glasgow Herald