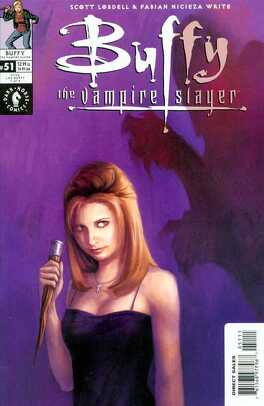 The Buffy monthly takes a bold new direction under the guidance of former X-Men writers Lobdell and Nicieza. It's 1996, and Buffy Summers has just accepted her role as the Vampire Slayer. After the destruction of her high school, she flees to Las Vegas to sort out her life. Meanwhile, Watcher Rupert Giles wonders why on Earth his Slayer hasn't arrived in Sunnydale. The comic takes you where the TV show never did, back to the roots of everything, in the summer before Buffy arrived in Sunnydale. And there's a tall, dark, and handsome stranger keeping an eye on her during those dangerous nights in Vegas. The saga of the Slayer begins again with a new direction for Dark Horse's monthly series!