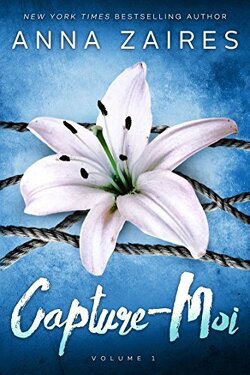 The two men in front of me embody danger. They exude it. One blond, one dark—they should’ve been polar opposites, but they’re similar somehow. They give off the same vibe.
The vibe that makes me go cold inside.
“I have a delicate matter I’d like to discuss with you,” says Arkady Buschekov, the Russian official beside me. His faded, colorless gaze is trained on the dark-haired man’s face. Buschekov says it in Russian, and I immediately repeat his words in English. My translation is smooth, my accent undetectable. I’m a good interpreter, even if that’s not my real job.

“Go on,” the dark-haired man says. Julian Esguerra is his name, and he’s a big-time arms dealer. I know that from the folder I studied this morning. He’s the important one here today, the one they want me to get close to. It shouldn’t be a hardship. He’s a strikingly handsome man, his eyes blue and piercing in his darkly tanned face. If it weren’t for that chill-inducing vibe, I’d be genuinely attracted to him. As it is, I’ll be faking it, but he won’t know.
They never know.
“I’m sure you are aware of the difficulties in our region,” Buschekov says. “We would like you to assist us in resolving this matter.”

I translate his words, doing my best to conceal my growing excitement. Obenko was right. There is something brewing between Esguerra and the Russians. Obenko suspected as much when he heard the arms dealer was visiting Moscow.
“Assist you how?” Esguerra asks. He looks only vaguely interested.
As I translate his words for Buschekov, I sneak a glance at the other man at the table—the one with blond hair cut in a short, almost military style.

Lucas Kent, Esguerra’s right-hand man.
I’ve been trying not to look at him. He unnerves me even more than his boss. Thankfully, he’s not my target, so I don’t need to feign interest in him. For some reason, though, my eyes keep being drawn to his hard features. With his tall, powerfully muscled body, square jaw, and fierce gaze, Kent reminds me of a bogatyr—a noble warrior of Russian folk tales.
He catches me looking at him, and his pale eyes flash as they lock on my face. I quickly look away, suppressing a shudder. Those eyes make me think of the slivers of ice outside, blue-gray and freezing cold.
Thank God he’s not the one I need to seduce. It will be much, much easier to fake it with his boss.
“There are certain parts of Ukraine that need our help,” Buschekov says. “But, world opinion being what it is right now, it would be problematic if we went in and actually gave that help.”
I swiftly translate what he said, my attention once more on the information I’m supposed to retrieve. This is important; this is the primary reason I’m here today. Seducing Esguerra is secondary, though likely still unavoidable.
“So you would like me to do it instead,” Esguerra says, and Buschekov nods as I translate.

“Yes,” Buschekov says. “We would like a sizable shipment of weapons and other supplies to reach the freedom fighters in Donetsk. It cannot be traced back to us. In return, you would be paid your usual fee and granted safe passage to Tajikistan.”
When I convey the words to him, Esguerra smiles coldly. “Is that all?”
“We would also prefer it if you avoided any dealings with Ukraine at this time,” Buschekov says. “Two chairs and one ass and all that.”
I do my best to translate the last part, though it doesn’t sound nearly as punchy in English. I also commit every single word to memory, so I can convey it to Obenko later today. This is exactly what my boss was hoping I’d hear. Or rather, what he feared I’d hear.
“I’m afraid I will require additional compensation for that,” Esguerra says. “As you know, I don’t usually take sides in these types of conflicts.”
“Yes, so we’ve heard.” Buschekov brings a piece of selyodka—salted fish—to his mouth and chews it slowly, looking at the arms dealer. “Perhaps you might reconsider that position in our case. The Soviet Union may be gone, but our influence in this region is still quite substantial.”
“Yes, I’m aware. Why do you think I’m here right now?”

Esguerra’s smile is reminiscent of a shark’s. “But neutrality is an expensive commodity to give up. I’m sure you understand.”
Buschekov’s gaze turns colder. “I do. I’m authorized to offer you twenty percent more than the usual payment for your cooperation in this matter.”
“Twenty percent? When you’re cutting my potential profits in half?” Esguerra laughs softly. “I don’t think so.”
After I translate, Buschekov pours himself some vodka and swirls it around the glass. “Twenty percent more and the captured Al-Quadar terrorist remitted into your custody,” he says after a few moments. “This is our final offer.”
I translate his words and sneak another glance at the blond-haired man, inexplicably curious to see his reaction. Lucas Kent hasn’t said a word this whole time, but I can sense him watching everything, absorbing everything.
I can sense him watching me.
Does he suspect anything, or is he simply attracted? Either way, it worries me. Men like that are dangerous, and I have a feeling this one may be more dangerous than most.
“We have a deal then,” Esguerra says, and I realize that this is it. What Obenko was afraid of is coming to pass. The Russians are going to get the weapons to the so-called freedom fighters, and the clusterfuck in Ukraine will reach epic proportions.
Oh, well. That’s Obenko’s problem, not mine. All I need to do is smile, look pretty, and translate—which I do for the rest of the meal.