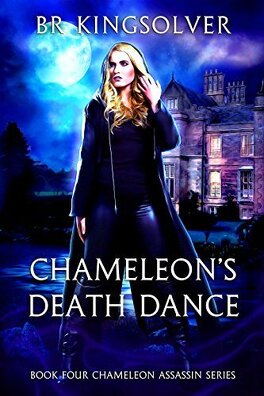 Sequel to the award-winning Chameleon Assassin and Winner for Best Fantasy (Contemporary/Urban Fantasy) of 2018.

Even a chameleon can be a target.

Libby makes her money as a thief and an assassin, but a girl has to have a cover. To her surprise, her business installing security systems in 23rd century Toronto is taking off, as is her romance with Wil—North America’s top cop.

Then an insurance company hires her to recover a fortune in stolen art and jewelry. Bring them the stolen goods and they'll pay an outrageous fee, no questions asked.

The Vancouver art scene is hot, in more ways than one. Billionaires compete for bragging rights, and they aren't picky who they deal with.

With big money and reputations on the line, Libby is on a collision course with the super-rich. When too many questions make the art thieves uncomfortable, one of the world’s top assassins is hired to eliminate those who know too much—including Libby.

Inspecting Danielle in the full-length mirror, I let the illusion go and watched the woman in the mirror grow three inches, her hair lighten to yellow-blonde, her face fill out and her cheekbones flatten. Her shoulders broadened, and her body thickened while her breasts shrank a bit, and her hips narrowed. The teal evening gown and diamonds disappeared, leaving a skin-tight black cat suit. It wasn’t very sexy, because of the pockets bulging with weapons and tools. Even after twenty years, it still astonished me that I could do that.

The Libby Nelson I’d spent my life seeing in the mirror was a very different—and more comfortable—woman than Danielle Kincaid.

I stripped out of the cat suit as I made my way to the bathroom to take a shower. I really wanted a bath, but the hotel room tub was too short.

After a month in Vancouver, I was finally making some progress. Of four people I hoped to meet at Marian Clark’s that evening, I’d managed to connect with three of them—Marian, Langston Boyle, and George Crawford, owner of a large jewelry corporation. Edward Buchanan, my fourth target, had been tied up for most of the evening in what appeared to be a deep discussion with another man I didn’t recognize.

Crawford didn’t evidence the least bit of interest in me, which I thought was surprising given the jewelry I sported. His wife seemed even less inclined to make my acquaintance. I knew they had a daughter in her early twenties and a son in his late twenties. If I needed to get closer to Crawford, I might have to look into befriending his children.

My presence in Vancouver was at the behest of Myron Chung, an investigator with North American Insurance Corporation, who contacted me at my home in Toronto. I had done some work for NAI in the past. As I took my shower, I replayed Chung’s call in my head.

“Miss Nelson, I have some work for you if you have some time.”

“How much time are we talking about?” I asked.

“Maybe as much as six months to a year, maybe only a few weeks.”