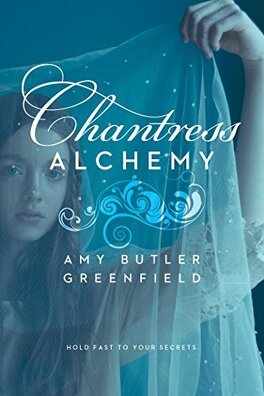 Since defeating the evil Lord Scargrave with her music, Lucy, the last Chantress, has lived by the sea, mastering the intricacies of Wild Magic. But now her quiet life is about to end: the wheat crop has failed, the people are rebelling, and Lucy is called urgently back to King Henry IX’s court. There she finds the Inner Council planning to save England by making gold through alchemy. But the golden crucible—the critical element in the alchemical process—has been stolen, its guards murdered. Lucy is charged with finding the traitor behind the attack.

Meanwhile, enemies old and new are gathering. Scargrave’s brutal Chantress-hunter has become King Henry’s closest advisor. Lucy’s beloved Nat has fallen out of favor and is shunned by his colleagues; their romance means trouble for both of them. Worst of all, something goes wrong with Lucy’s magic. The palace is a labyrinth, and there’s a monster at its heart—a monster who may have the power to defeat Lucy once and for all.

Amy Butler Greenfield returns to the beguiling world of Chantress for an exciting tale that weaves together courtly intrigue, magic, romance, and music in Chantress Alchemy.