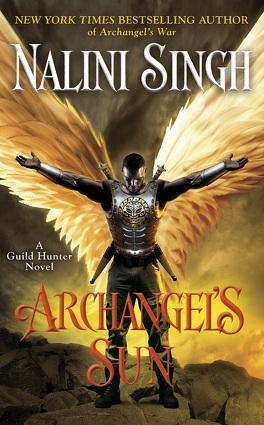 The Archangel of Death and the Archangel of Disease may be gone but their legacy of evil lives on—especially in Africa, where the shambling, rotting creatures called the reborn have gained a glimmer of vicious intelligence.

It is up to Titus, archangel of this vast continent, to stop the reborn from spreading across the world. Titus can’t do it alone, but of the surviving powerful angels and archangels, large numbers are wounded, while the rest are fighting a surge of murderous vampires.

There is no one left…but the Hummingbird. Old, powerful, her mind long a broken kaleidoscope. Now, she must stand at Titus’s side against a tide of death upon a discovery more chilling than any other. For the Archangel of Disease has left them one last terrible gift…

Thinking of her son, she glanced down at the letter again. He’d be proud of her if she did this, proud of her for having the strength and the courage. And so she would. She’d let him down for far too long. It was time Illium had reason to call her his mother with pride.

The last of the sun’s rays caressing her wings, she crossed the rooftop to enter the building. She then made her way to the well-appointed room shiny with technology she didn’t fully comprehend.

However, she’d learned the usefulness of such things in the time since she’d stepped fully out of the kaleidoscope. Now she asked one of her loyal people to put through a call to Raphael.

She took that call in the privacy of the office suite that was her own. An aged white desk with curved legs, soft fabrics on her furnishings, fresh flowers, paintings on the walls, this was a far gentler room than the one that appeared on the wall screen in front of her.

Raphael’s office leaned more toward glass and steel, akin to his city. She could see none of Manhattan’s glittering lights in view around him, but what she did see were the shelves that held unique treasures—including a feather of purest blue that struck a pang of need in her heart.

“You look tired, Raphael.” Lines of strain, knotted shoulder muscles, faint shadows under the striking blue of his eyes. So many times she’d painted that blue—first in an attempt to capture the eyes of the archangel who was her closest friend, then the eyes of Caliane’s son—always it took her an eternity to get the color just right.

Crushed sapphires, molten cobalt, the mountain sky at noon, all this and more lived in Raphael’s and in Caliane’s eyes.

As an artist, the color was one of her greatest challenges and greatest joys.

He thrust a hand through his hair. “It’ll be a long journey for all of us before we can rest.”

Sharine felt the urge to mother him; she wasn’t certain that urge would ever pass. He’d been but a youth when Caliane walked the path of madness, and though Sharine was a fragile creature even then, the spiderweb cracks growing year by year, she’d been there. After finding his broken body on a field far from civilization, she’d covered him in the shade of her wings and she’d brushed his tangled hair back from his face, and she’d held him.

Such a determined youth he’d been, but so very wounded inside.

To see him now, strong and vibrant and loved fiercely by a woman who was everything Sharine could’ve ever wanted for him had she the imagination to consider that someone like Raphael’s consort could exist, it made her heart bloom, made her believe in happiness and in changing your destiny.

Caliane had never told her son, but at Raphael’s birth, some of the bitter old ones had whispered that this was a child bound for lunacy and decay, that his mother was an Ancient far too long in the tooth. So strange, that such a prejudice could exist in a race of immortals, but there were always those who looked for the darkness in everything.

Those same ones had whispered that Sharine was the harbinger of death.

Caliane’s boy had quieted them all. He was a shining embodiment of the best of them, a critical reason why the world wasn’t today drowning in blood and death. Not the only reason, however. “Where is Elena?” Her fingers curled into her palm at the memory of the knives she’d held under Elena’s tutelage.

“In the park with her best friend, Sara, and Sara’s child,” Raphael said, his face lighting up in a way it never did for anyone else. “We decided that we could all do with an hour away from the grim task of getting the city to rights. It shatters the spirit, to see our home in ruins.”

Sharine could not imagine the devastation of seeing a cherished city broken and burned, but one thing she knew—Raphael’s city was a place with a brave heart. It would rise again, gleaming towers of metal and glass that touched the sky, its rivers clean of the debris and gore of battle, and the scorched land rejuvenated.

“What will you do with your hour, my boy?” she said, itching to push a wayward strand of hair away from his eye.

A sudden, dazzling smile. “I’m going flying with Illium. We plan to meet Jason as he flies home.”

“I’m surprised that you even know he is in the vicinity. Your spymaster is wont to slip in and out of cities like smoke.” She knew very well that Jason had been near Lumia in the months prior to the war, but she’d only discovered that after the fact.

The Cadre trusted her, but that didn’t mean she wasn’t under watch. A decision with which she had no argument. No one had watched the one before her, and evil had thrived. Simply because she had no intention of doing the same didn’t mean the next person to have this responsibility would be as trustworthy.

Raphael laughed, making her smile, it reminded her so of his gleeful childhood laughter as he all but bathed in paints. “I’m of the opinion that Jason allowed himself to be seen. He knows we worry about him when he is beyond our help—and so, sometimes, he throws us a bone.”

Shaking her head at these games of the young, Sharine said, “I’ve received your letter.”

Astonishing blue eyes holding her own, laughter yet lingering in them. But his words when they came were of an archangel. “What do you say to our request, Lady Sharine?”