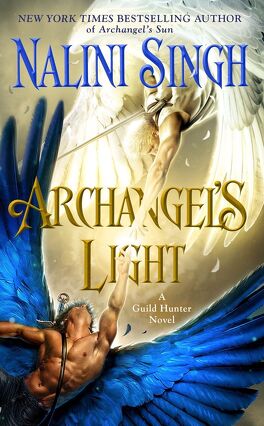 Illium and Aodhan. Aodhan and Illium. For centuries they’ve been inseparable: the best of friends, closer than brothers, companions of the heart. But that was before—before darkness befell Aodhan and shattered him, body, mind, and soul. Now, at long last, Aodhan is healing, but his new-found strength and independence may come at a devastating cost—his relationship with Illium.

As they serve side by side in China, a territory yet marked by the evil of its former archangel, the secret it holds nightmarish beyond imagining, things come to an explosive decision point. Illium and Aodhan must either walk away from the relationship that has defined them—or step forward into a future that promises a bond infinitely precious in the life of an immortal…but that demands a terrifying vulnerability from two badly bruised hearts.

Halting in the air, his wings balanced in a silent hover, he looked around. His eyes had long acclimated to the dark, but the world was a stygian blackness tonight, the lights of the stronghold and settlement too small and few to make any difference to the sky. The suffocating weight of the night put him in mind of Lijuan’s death fog, a thing of whispering evil that had murdered by its mere presence.

Its memory would haunt all who had witnessed it.

Despite his inability to see the intruder, he knew someone was heading his way. Since he hadn’t been warned by the sentries posted farther out, either it was a cunning foe—or an expert at stealth like Jason. Aodhan respected the spymaster and fellow member of the Seven, but it turned out that the seconds of archangels did not appreciate stealth skills in the spymasters of other archangels.

“Oh, I love Jason and what he can do,” Dmitri had said with a slow grin when Aodhan brought up the topic over a call. “But it drives me insane to know other spymasters are ghosting in and out of our territory.”

At least Jason was no threat to Suyin. The same couldn’t be said of all the spymasters—a year after the war and a number of others in the Cadre had rehabilitated their territories to the point that they had the time to turn a critical eye to China’s untried new archangel.

Aodhan wasn’t concerned about a martial assault—no one wanted China, not when Lijuan’s malevolent shadow loomed large yet. The general consensus was that the territory wouldn’t be fully “safe” for at least a millennium, perhaps more. However, the rest of the Cadre could make things difficult for Suyin if they judged her unworthy of her ascension.

It wasn’t only the archangels, either.

Jason had passed on the tidbit that a few of the older angels had begun to mutter that her ascension had been a thing of war, an emergency measure that would’ve never kicked in were it a normal time.

That it wasn’t a normal time even now seemed to escape them.

The world was still down one archangel, and while Elijah had healed enough to have made an appearance at the last Cadre meeting, Aodhan—attending out of sight at Suyin’s invitation—had seen that he was far from his usual self. It was no wonder he’d turned down a physical meeting in favor of one held via technology.

Elijah wasn’t the only one marked by battle scars. Neha had turned reclusive and—per Jason—her senior court had begun to whisper that she craved Sleep; it wasn’t a future at which either her people or Aodhan looked on in pleasure. Whatever her faults, Neha had always been one of the most stable of the Cadre.

Added to that, Michaela hadn’t returned and neither had Favashi or Astaad or any of the others who’d fallen. As for Qin, he had half a foot in Sleep, half in the waking world.

Where was the intruder?

Power wreathed his hand as he considered whether to light up the sky, but that would be a waste of energy and would frighten an already scared populace. It’d take a very long time for the people of this land to sleep easy. Most were probably still awake at this late hour, haunted by nightmares of grief and pain.

Then he saw it.

Such as that emitted by the wings of archangels who were powering up to strike.

He should’ve alerted Suyin at once, but something made him hesitate, frown. He knew those wings. The shape of them, how the bearer held them in flight, it was all familiar on the deepest level.

He sucked in a breath.

Because he knew one other person whose wings glowed at times. An angel who it was whispered would one day ascend.

His heart a huge ache, he altered speed to fly hard and fast toward that faint glow. With every beat, it grew brighter . . . before flickering out like a candle that had been snuffed out between uncaring fingers. But Aodhan was close enough to see.

He came to a hover across from the angel from whose blue wings the night had stolen all color, turning them obsidian. “Illium.” The single word came out rough, gritty. “What are you doing here?”