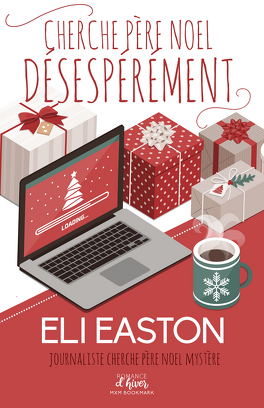 “Gabe’s in journalism,” Jordan said helpfully. “How’s that big final project of yours going, Gabe? Was it for your investigative journalism class?”

I silently thanked Jordan for trying to make me sound impressive. “Yeah. I think I’m in luck.” I looked around the table at Owen and Mack. “See, I’m interning at the Wisconsin State Journal, and I finally got my first story assignment. I have to write about a charity dinner the Elks hold every Christmas for St Mark’s. They’re a children’s home.”

“So anyway, I also need to write an investigative story for my class, and I think I’ve found an angle on this Christmas charity thing that might work for both.” Just saying it out loud, my excitement about the project reignited.

“So the Elks have a guy who plays Santa for the kids every year, right? Only no one knows who he is. He shows up in costume, leaves in costume… they have no idea what his name is.”

Jordan paused, cutting his last bit of lasagna. “Hmmm.” He clearly didn’t get it.

“I was thinking I could build it up into a mystery, maybe by writing a series instead of a single story. Then I’ll do a big reveal at the end.” I was on a roll now. “I mean, it’s strange, don’t you think? Guy comes into the place every year and interacts with all those kids and no one has the first clue who he is? What if he’s the mayor or the DA or something? Or a celebrity? There are a few from Madison. Or someone with a criminal record or a tragic past? I’d love to get an interview with this ‘mystery Santa’ as a capstone to the piece.”

I glanced around, practically thrumming with the idea. But the look on Mack’s face was not at all what I expected. His mouth was set in a grim line and there was a thundercloud of a frown on his forehead.

He carefully put down his fork and turned to me. “Why would you do that?”

“Try to out some guy who obviously just wants to do his thing and be left alone?”

His tone was hostile. Which I totally didn’t get. “Out him? Well…” I stammered. “If he wants to play Santa at a charity dinner, why should he keep his identity a secret? It’s weird. I think so, anyway.” I sounded defensive, but he’d taken me by surprise.

“Huh. That’s cool, Gabe. Is anyone ready for dessert?” Jordan put in with forced exuberance. “Mack? Berries and chia pudding? I made it just for you guys.”

Mack was staring at me, and now he looked away with a slow blink and lip curl of disgust. It might have been my imagination, but it felt like the snapping of a tenuous thread of connection between us. I felt sick to my stomach at the sudden chill, the finality of the severing.

“Thanks, Jordan, but I was planning to go to the gym tonight.” Mack patted his stomach and stood up. “I’m full. Any more and I’ll suffer on the treadmill.”

Damn. That had to be a whopper of a lie. I’d eaten more than Mack had, and I wasn’t full.

“Um. Okay.” Jordan sounded disappointed. “Want some coffee? Or Owen has some immunity-boost tea he drinks this time of year.”

But Mr. Reserved had turned into Mr. Ice. Mack’s face was entirely shut off. “Nah. I need to get going. It was nice of you guys to invite me for dinner, though. I owe you.”

He headed for the living room without waiting for a response. Jordan and Owen exchanged a worried look, and then Owen got up to see him out. When Jordan and I were alone, he made a fist in the air, puffed out his cheeks, and spiraled one finger down, down, down with a falling bomb sound. His hand plopped on the table and lay there twitching.

ON FRIDAY NIGHT, I went over to Jordan and Owen’s place for dinner. Jordan had been unusually pushy about it, bugging me by email and text. He said he had something he wanted to discuss with me. I didn’t have any other hot plans except working on my article, so I went. Hey, if Jordan wanted to talk, I was prepared to be there for him, like a bro.

When Jordan let me in, he was wearing a screaming pink T-shirt with Japanese writing on it. The pink brought out his dark hair and eyes, but, man, only an artsy guy like Jordan could get away with that color. Then again, I’d seen him sport neon yellow Diesel underwear that peeked out an inch above his low rider jeans, so this was hardly his most daring look. He had a strange expression on his face tonight, though. He looked nervous.

I was immediately wary. My gaze flickered to look behind him. “What’s going on?”

“Nothing! Why?” Jordan took my wrist and pulled me into the apartment. The door shutting behind me felt a little ominous.

“Um… because you look like you’ve been caught with your hand down your pants?” I said. “Oh. Right. Did I come at a bad time? Were you and Owen, like…” I made an obscene gesture with my hand.

“Ha-ha, don’t be silly.” Jordan’s laugh was fake. “Just come into the kitchen. Dinner’s still in the oven.”

“You mean you haven’t unboxed the pizza yet?” I snickered.

“I could pretend I slaved all day, but it’s frozen lasagna, actually.”

“Hey, that stuff’s not cheap.” Lasagna sounded great to me. Mi mama made a killer one with chicken and enchilada sauce and olives. But I liked the regular Italian kind too. As long as it had cheese, I was happy.

When I walked into the kitchen, I saw the source of Jordan’s guilty look. It was impossible to miss. Owen was at the sink rinsing something, and standing at the counter, cutting up veggies, was an absolute giant.