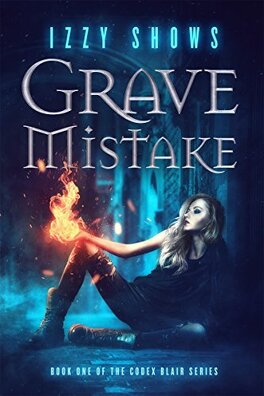 I am Blair Sheach, and my life will never be the same. New found powers don't make a hero overnight, but somehow I've become the last line of defense for the city of London. Vampires and demons crawl the streets, magic cops suck at keeping them in line, and the easy job I took to pay my rent has turned into something far more complicated. The cheating deadbeat my client hired me to find just so happens to be the necromancer hell bent on destroying London, and it's up to me to stop him.

I'm out of luck and out of time. And to save my city, the decision I have to make is one I can't take back.

The bar smelled of beer, sweat, and desperation. So, you know, like every other bar you've ever been in.

I was curled over a pool table, sizing up my target, with a smirk decorating my lips. I'd been playing pool for most of my life, it wasn't a challenge for me. Well, there was this time. I was trying not to play my best, didn't want the enemy to know that I was hustling him.

I scratched. Huffing out a disappointed sigh, I stood up with shoulders slumped.

"I can." He rolled his eyes, scoffing at me. "Everyone knows girls can't play."

I bit the inside of my cheek, glaring down at the floor. Idiot. I could play circles around him.

I watched as he landed two balls before missing the third.

I couldn't help myself, I sunk my remaining balls with my normal ease. Show him what girls could do. Maybe I rile too easily, but I'd been subjected to this kind of derision for various foster fathers most of my life. When they hadn't been ignoring or beating me, that is.

Funny though, it was much easier to take a punch to the gut than one to the psyche.

"What the fuck!' My opponent shouted. "How the fuck? - you hustled me!"

I shrugged. "Time to pay piper. Not my fault yo can't play for shit." I held you my hand and gestured for him to pay up.

He advanced on me instead. I took a step back, eyes narrowed as I sized him up.

This was always a risk in a situation like this, that the person would refuse to pay up. I had a hunch that he wouldn't have paid me even if I'd 'miraculsouly' pulled off a win while playing like shit.

"I ain't paying you," he growled, swinging his cue stick at me.

I ducked the blow, relying purely on instinct to bring me far enough down to avoid the hit. I brought my now up in an arc and caught him on his chin. It sucked that I wasn't going to get paid - I hadn't earned enough this month to pay my rent, I really needed the money. Tomorrow, I was out of time and this been my fall-back.