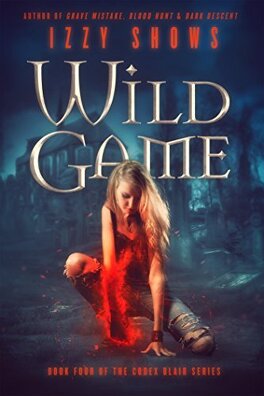 A Werewolf, A Fae, and a Wizard walk into a bar...

All right, maybe the Fae didn't come in with me, but the wolf does own the bar. And I thought he was my friend, but now I'm dealing with attacks on the people I've sworn to protect and the evidence is too wolfish to deny.

As if that wasn't enough, I've got that Fae I mentioned beating down my door, begging me for help. Something's chasing him, and I'm the only game in town--and if I don't do anything, whatever it is will turn its sights on my people after its done with him.

I swore on Aidan's grave I would keep this town safe, and I won't let him down.

Two cases, one Wizard to solve them.

The cards are stacked against me. Let's see if I can pull this off.

"You have to try harder," I said, all but snapping the words out at Lilith.

It had been one week since we had taken her and chained her up, and she hadn't made a lick of progress. Was I wrong to expect so much from her? I admit it, I had a short fuse when it came to addicts.

I had known too many bad ones to have any patience with them.

"Blair..." Mal spoke up from behind me, placing a hand on my shoulder. I jerked away from him, shrugging him off, side stepping for good measure. We still hadn't talked about what had happened last week—when he kissed me. And if I had my way about it, we weren't going to. For a minute, I thought that talking about it would make it easier to move on, but sleeping on it had made me change my mind.

Now if only I could get myself to go back to normal and pretend it had never happened. Mal didn't seem to be having a problem with it, but I couldn't stop thinking about it. My normal nightmares now replaced by haunting dreams of his lips on mine, his hands roaming my body and bringing me to life.

Ironically, instead of talking to Mal about it, I had talked to Shawn. The man was ridiculous, not a jealous bone in his body, and he found the entire scenario hilarious. He didn't understand why I got so worked up about it, even though I'd broken down and confided in him that Mal was Fallen. He didn't see the big deal, had even told me that maybe if I just shagged him it would get him out of my system and I could move on.

Part of me agreed with him.

The saner part of me knew that was a horrible idea and that I was just going to have to practice some self-control, which would be a lot easier if Mal's version of getting back to normal didn't include hitting on me. But that was the way it had been, and I was going to have to get used to that again.

I crouched in front of her, looking for any sign of life in her drug crazed eyes, and lifted my hand so that it hovered between us. "Sicco." I clenched my hand into a fist.

She screamed, an understandable reaction, because I was pulling her essence out of her. I felt it, ripping through her skin piece by piece, and flowing into my hand. It was a horrible spell, a dark spell, that I should have never learned. Fred hadn't wanted to teach it to me, it had taken a lot to get it out of him, but it was the only way I could see to speed up this process. I didn't have centuries to spend with the succubus, and I didn’t fancy the idea of leaving her in Mal's care.

A demon could only be trusted so much.