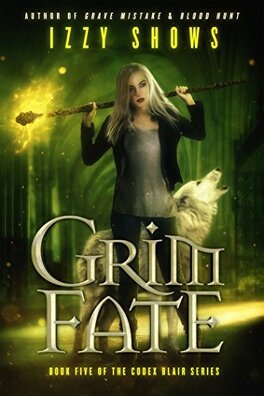 The Order has come for me. I am to be weighed, judged, and found wanting by a group of Wizards that want my head more than they want the truth.

They don’t know that on my wrist is a mark branding me the possession of a demon.

If they find out? I’m dead the moment I walk in the door.

A series of trials lie between me and my freedom, but something’s wrong, the system’s been rigged.

It doesn’t matter. I’ll give these Wizards what for.

It has come to our attention that you are unlawfully practicing magic in the city of London. We shall come for you at dusk on the morrow. Failure to comply will be taken as an admission of guilt and is punishable by death.

Commander of the First Hand

I read and re-read the letter, unable to accept the proof in front of my eyes.

I had been found out. Somehow, some way, it had happened, and there was no going back from it. Of course, the first thing that popped into my mind was the all-important ‘How?’ How had I been found out? Who had told the Order about me? Who was the snake who had endangered my life so recklessly? There was no way to know, even I knew that, but still … I wanted to know.

I wanted to make the son of a bitch pay for ruining my life like this. Because, make no mistake, my life was well and truly over as of this moment. The Order was not going to allow me to live, not with all I had done. I might not have killed Deacon—it was Emily who had dealt that killing blow—but the Order wasn’t going to believe that for one second. They would want someone to blame, someone to pin it on, and I would be that someone. Then there were all the things I had done since then. Working with vampires to kill vampires, endangering the magical community to trap a succubus—not to mention, I hadn’t actually got rid of the succubus.

Oh, yes, hello, Order. I know succubi are evil and whatnot, but I have one hiding in my friend’s house, and I swear we are totally rehabilitating her.

Yeah, I was as good as dead. I was living on borrowed time.

My second thought was to run. To pack my bags and beat it the hell out of there as quickly as possible. Flee to the continent. But the continent wouldn’t be far enough; the Order would have strongholds there. Africa, maybe? Would they have their fingers in the pie of the colonies, or would it be safe to flee there instead? I had no idea, but I knew I needed to get out.

I jumped to my feet, the letter falling to the floor of my living room, and looked around me. My eyes were wild for a moment as I took in my surroundings as if for the first time. A small living room, cramped but cosy, with a sofa and two chairs, a coffee table, a fireplace, and a bookshelf. The bookshelf was overflowing, with paperbacks strewn on the floor in front of it, and the carpet was a dingy colour. It might have been white at some point in time, but now it was a brownish sort of grey.

My hands shook. The left one was still in its sling, which held it more or less in place. It was then that I remembered my injuries, glanced down at the offending limb, and realized that I couldn’t flee. I wouldn’t make it very far, not with broken ribs and a broken arm and Gods only knew what other injuries I’d sustained at the Utakar’s hands. I was pretty sure I had fractured my cheekbone.

The numbness started to leave my body as the reality of life settled in, the swamping pain taking me and driving me back down onto the couch from which I’d stood. So much had happened in so little time. I’d just met the King of the Wylde Fae, though I didn’t suppose he went by that title, and he had all but promised me the favour of his people if I ever had need of them. That was wild enough on its own. I’d also lost the fight of a lifetime. I’d been taken to the cleaners by the Utakar. It would have killed me if it hadn’t been such a sadist; it had decided it would be more fun to torture me for the rest of my life than kill me then and there. I almost wished it had killed me. At least it would have saved me from the Order doing it.