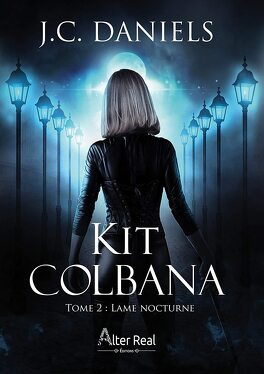 I excel at ignoring certain things.

Justin wouldn’t be ignored for long, but I could damn well put him off for one day and that was exactly what I did.

I had to get to the bank. Two checks from two different jobs, just waiting to be cashed.

And besides…I had a date. Since I had some money that didn’t immediately have to be poured into fixing or strengthening my wards, I did something I never did. I went and bought a new outfit.

Nothing fancy because I still needed to be able to move, especially since I was meeting Damon at Drake’s. Walking into a shapeshifter hangout looking like a sex kitten wasn’t going to do me any good, because then I’d be nervous and I’d freak myself out…yeah, not going there.

But a new top, the same shade of gray as Damon’s eyes, new jeans. I could do that.

“Ms. Colbana, would you look out whatever window might be around you?”

I didn’t need to.

“Oh, I know what time it is.” I tapped a stylus against my thigh. “It’s mid-afternoon and I know he’s not required to attend to any…formal…business until after sunset. But if I don’t hear from him by sunset, I’ll put in a formal request for his presence at Banner HQ. Since I’m logging off thirty minutes after sunset? He’ll spend the night on premises.”

A long, taut silence passed and then, in a frigid voice, she informed me, “I’ll pass the message along. I assume you’ll be at your offices?”

My blade is strong.

Strong enough to handle a lot of things but not enough to handle the four shifters who had been trailing me all day. Cutting through the streets of East Orlando, I checked them out again and sighed.

That was what was my gut said, although it was hard to be one-hundred percent positive, considering I had to watch them from my rear-view mirror and they were tucked away inside their nice, shiny little luxury sedans.

East Orlando was lousy with weres. We had the wolf pack, the cat clan, and over the past few months, rats had been trickling back in. They’d been scarce in these parts for a good six years, ever since the last nest had been wiped out.

I didn’t know why the rats had decided to start moving back in now, but that was a puzzle to solve later. Right now, I had to get to my office. Once I was there, I’d feel better about facing these guys and seeing just what in the hell they wanted.

Whatever it was, they had to want it pretty damn bad, because they had been tailing me since shortly before lunchtime and it was nearly four now.

The office for Colbana Investigations, Inc. is officially Assembly of Non-Humans—or ANH—neutral ground and if the wolves got testy there, things would go bad for them. The ANH frowned when their members got involved in bloodshed on neutral territory. That was why we had it. So we could carry on business like civilized people.

Not that we were. Well, some of us were more civilized than others. I tried to be. Civility proved useful in my case, since I wasn’t strong enough to separate a body from its body parts unless I used a sword.

Still, if those were the wolves, I was probably being paranoid for nothing. Wolves were nice and orderly and all about following rules. They drove BMWs and Audis. They kept to the speed limit; they used their turning signal and they let other people in when the traffic was tight.

Yeah, the wolves were all about courtesy.

If it had been the rats, the cars would be clean but simpler—none of them had been around long enough to drive cars that nice. Plus, they wouldn’t be so damned patient, they wouldn’t be following the speed limit and they damn for sure wouldn’t have waited all day like this while I led them on a merry chase.

And they weren’t cats. The cat clan had a better way of getting my attention.

I was probably worrying about nothing. Still, I had ended up on the wrong side of the shifters before. I believed in better safe than sorry.