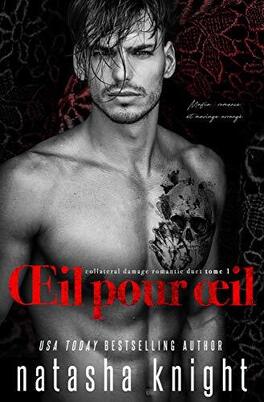 “You’re not supposed to be here,” I finally manage, sensing something dangerous. And I remember for all the friends my father has bought, the number of his enemies is double that.

“No, I’m not,” the man says, his voice a deep, sure timbre that ices my spine.

He takes a step forward and I take one back, my hand closing over the doorknob behind me.

It ripples off him.

“What’s that smell?” I ask before I can stop myself.

“Morgue,” he answers, his voice low and hard.

He walks toward me, no hesitance in his step, and before I can move, he’s standing just a few inches from me.

The smell clings to him and it’s making me sick. When I cringe back, he leans toward me and I open my mouth to scream just as something clicks.

But then the room is bathed in soft, golden light. He’d just reached to switch on the lamp on the table beside me.

I exhale but my relief is short-lived.

His disheveled hair is dark, eyes hazel and I think he’s drunk. He must be. Only a drunk man would enter Gabriel Marchese’s daughter’s bedroom.

Or one with a death wish.

He doesn’t answer me but studies my face instead. His eyes narrow as he takes me in, his gaze lowering to the swell of my breasts lifted and pushed together by this ridiculous gown. It, like the roses, is pink. A soft, champagne pink. A color I don’t detest.

He tucks his hand into his pocket and for a moment, I wonder if he’s going to pull out a knife or a gun. If he’s going to kill me after all. Because I know this man is not my father’s friend. Not even a business associate. And for the first time in my life, I think about the protection I’ve always lived under. The protection that often felt more stifling than anything else.

“It’s your birthday, isn’t it?” he asks, cocking his head to the side, setting one hand on the door above my head. He’s leaning so close that I can feel the heat coming off his body.

“How did you get up here?” There are guards everywhere.

He lets what he’s holding dangle and my gaze shifts to it, to the pendant hanging off a gold chain. It’s too dark to make out the details.

“You shouldn’t be up here. The party—”

“I’m not here for the party. I’m here for you, Gabriela.”

My blood runs cold at his words.

My father, as much as I hate to admit it, scares me. But this man is terrifying.

His lips curve into something wicked. A grin. A sneer. I wonder if he can feel my fear. Maybe smell it coming off me. Men like this can, can’t they?

“So I can give you your birthday present.”

“I said turn around.”

I should scream. Alert a guard. There are plenty of them. But I just keep staring up into his hazel eyes and I think how strangely beautiful he is, even for as fucked up as he looks. As drunk as he obviously is. As crazed.

He moves his hand from above me once my back is to him, so when he lifts the chain over my head and brings it down to set the pendant against the swell of my breasts, I smell that smell again. On the sleeves of his suit. On the skin of his hands.

I look down at the pendant, but he pulls it higher so I can’t see it. Instead, I notice the ring on his finger, a heavy, dark ring.

But then those fingers touch my skin and it’s like touching a live wire. I gasp, listen to the hammering of my heart, wonder if he hears it. If he feels that shock of electricity.

I don’t move as he pulls the chain tight, the pendant at my throat. He tugs and a new panic takes hold. I think he’s going to strangle me with it.

I make a sound, a pathetic whimper. I should scream but it’s like my throat has closed up.

“It’s broken,” he says. “That’s rude, isn’t it? To give you a broken gift?” His deep voice is low, his breath on my neck sending a strange sensation down my spine. “But that’s how I got it, too.”

I realize what he’s doing. He’s tying the chain. He must be.

I reach my hand to touch the pendant and when I do, something crusty flakes off.

A glance at my fingers shows a flake of dark red and I know it’s blood. I know it.

My stomach heaves and I tighten my muscles, trying to quell the urge to vomit.

“There,” he says. I smell whiskey on his breath now that he’s closer and hear him inhale as the scruff of his jaw scratches my bare shoulder and I shudder.

Undeterred, he tilts my head to the side and presses his lips to the curve of my neck. To my pulse.

My breath catches and I can’t move.

This man isn’t kissing me.

But his lips, they’re warm. And that disgusting smell of chemicals and death, it’s going to make me sick. He must feel my knees give out because he wraps one powerful, muscled arm around my middle, tightening his grip as he holds me against him.

He brings his mouth to my ear, breathes in a deep breath.

“Do you know who I am?” he asks in a whisper that makes the hair on the back of my neck stand on end.

I give a little shake of my head.

He turns me so I’m facing him, presses me against the door with one hand on my belly as the fingers of his other hand trail the line of my collarbone and touch the pendant.

When I finally meet his gaze, what I see in his eyes makes me go cold.

Those names mean nothing to me. Should they mean something?

“And I want you to give your father a message for me,” he starts, pausing for so long that it feels like the air is heavier for the unspoken words. For those that are still to come. “Tell him I’ll be back to take something precious too.”

An eternity passes before he steps backward.

My knees buckle, and I catch the doorknob to remain upright. It’s suddenly freezing in my room and I’m shivering.

“You won’t forget to give him my message, will you?”

He nods, eyes narrowing, a smile that’s not a smile at all turning the corners of his mouth upward.

“Happy birthday, Gabriela,” he says, and with that, he’s gone.