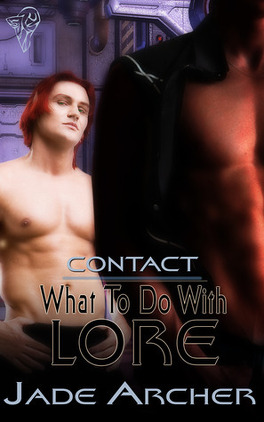 A rough around the edges mercenary and a little spit-fire determined not to be anyone's pleasure slave-making contact has never been so volatile . . . or so much fun!

Rhyn is an ex-lawman working as a mercenary. He's contracted to protect large space freighters and passenger liners through space. He considers most sentient beings too annoying to be around on a permanent basis. He's content to swear at inanimate objects and tinker with his pride and joy-Baker's Pride; a bastardised freighter with more than one nasty little surprise under the hull skin just waiting to spring on the unsuspecting pirates he loves to goad and chase.

That is until his latest assignment brings him face to face with a stunning, fiery little cat man slave named Lore. Will the siren he discovers lead him to new horizons or will he crash and burn up on re-entry to reality?

Lore's not having a very good day. He's been reclassified as a pleasure slave, traded off-world, knocked on the head and placed in stasis and now he's woken up surrounded by four of the biggest, hairiest men he's ever laid eyes on. Oh! And it looks like they're pirates.

Just as well he's handy with a skillet and the pirates aren't immune to a few well placed hits! Will the sudden appearance of a glorious, dark skinned angel in a lawman's hat be the answer to all his lust filled prayers, or is he just another devil in disguise sent to snatch all his hopes and dreams away again?