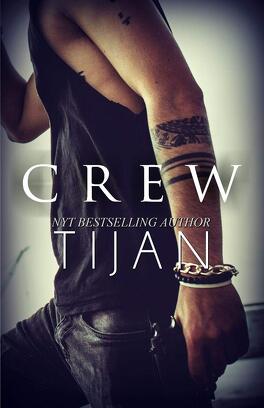 To survive where I live, you have two options.

You can be a Normal--a cheerleader, jock, member of the debate team, or on the yearbook committee. You pretend everything is normal.

Or you can be crew.

You insult us? We hurt you.

You hurt us? We really hurt you.

And if you screw with us, we will end you.

My name is Bren.

I'm the only female in the Wolf Crew--the best, fiercest, and most dangerous crew there is--and we have a rule: There's no falling in love.

A moment later, we heard the footsteps coming up.

More footsteps, coming to his room.

I held my breath, feeling my pulse pounding in my ears, but Cross didn't move away. His arms didn't loosen, and neither did mine.

The footsteps stopped outside the door. "Dude!" Jordan pounded on it. "You guys in there?"

Cross stifled a curse, one hand anchored behind my neck, and he lifted his head toward the door. "We're talking."

I pressed my mouth into Cross' neck. He ran a hand down my back.

"A Bren talk." Cross' grin was wicked, looking down at me.

I shook my head, unable to keep from grinning back, and pressed a fist to his chest. He grabbed it, flattening my hand against his chest instead.

I sucked in some air. His heart was going just as fast as mine.

"We'll catch up with you later."

Shit. I had to talk.

I tried smoothing out my voice so it came out normal. "Yeah?"

Cross put his lips to my ear, whispering, "What you said at Manny's, about your dad." Then he began nibbling.

I almost melted, my knees jerking.

"It's about what I said earlier. I just, I have to--best friend time, you know?"

"Yeah." Jordan sighed. "Taz wants to take Race to the hospital, so Z and I are going with the girls. They're shook up. We're going to comfort them, if you get my drift."

Cross snorted, tipping his head back. "Have fun getting laid."

Jordan laughed. "Yeah. Yeah. See you guys." He tapped the door once in his farewell, then started back down the hallway.

Cross dipped down, grabbed me around the legs and tossed me onto the bed.

He followed right after, dropping to the bed almost at the same second. His hands slid up my neck, his fingers moving through my hair, and he bent down, his lips meeting mine, taking mine.

He commanded, and I answered. I couldn't do anything else. This guy--I'd do anything for him.

It wasn't long until we heard everyone start to leave--footsteps traipsing outside, crossing the lawn. Voices outside, then car doors opening and closing. Headlights came on, some lighting up his room, until suddenly and so blissfully, everyone was gone.

It was just us. Us and his bed.

He paused, lifting his head. "Did you want to go to the hospital too?"

This was what I wanted. Him. Me. Alone. I just purely wanted him.

I wanted to let go of the armor I had to wear all the time. I could with him, and I was at that moment. I was merely a girl being held in the arms of the boy she was already in love with.

He'd been watching me and ran his hand down my hair again before moving to the side of my face. His thumb rested over my cheek. "I want you. God." He groaned, his lips coming to mine again. "I want you."

I whispered back, "Then have me, because I want you too."

His eyes blazed, burning into mine, dark and fierce and powerful, and he leaned down again. His lips touched mine as his hand slid inside my jeans.

My head fell back. Pleasure and ache surged inside of me. "Shit, Cross."

"Hmmm?" His lips moved down my throat. He touched right where my artery was, where the blood was pumping, and began to suckle there.

I felt his hand on my stomach, and he slid it upward, moving my shirt as he went. I stretched out, savoring this feeling as he explored my body, pulling my shirt up and off of me. I wore a sports bra, and that came off too. As soon as it did, his mouth was on me. He was kissing, licking, tasting. He was savoring me.

Every inch of me was in a frenzy. He added to it, making it richer, stronger, making it rise all over me until I was quivering in his arms.

"Cross." I grabbed for his shirt. I wanted it off. Now. Desperately.

Taking the end, I pulled it up and Cross pulled back, helping toss it off of him. He paused, right there, settled firmly between my legs, his jeans unbuckled, and his shirt off. I could see him in the street light. It cast a perfect glimmer through his curtains, just enough where I could see all the shadows over him. Rising up, I began to kiss him. I kissed his chest, moving down, lingering, exploring him the way he had done to me.

I made him shake, quiver, groan.