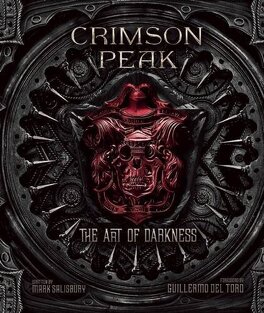 Crimson Peak: The Art of Darkness

"I really love Lucille", says Jessica Chastain. "This is a girl my heart really goes out to. I don't see her as terrible, even though she does very, very bad things. I have so much empathy and compassion for this little girl; the abuse she suffered as a child, the abuse she suffered as a young woman in the mental institution she was sent to. I thought, mental institutions at that time, what would have happened to this teenage girl? She would have been raped. That informed a lot of choices for her."

When Sir Thomas Sharpe arrives in Buffalo from England, he is a blast from the past. With a family estate and clay mine in the north of England, this dashing young English aristocrat is an exotic reminder of the Old World for those denizens of the New.

"Thomas Sharpe is the tall, dark stranger from the other world", says Tom Hiddleston. "He does have an extraordinary magnetism, because he's English. He has old-fashioned clothes, he has old-fashioned manners, he has an old-fashioned accent. And everybody wants to know him. What Guillermo does is he draws everybody into that magnetism, then reveals his true hand. Thomas Sharpe is a very complicated man who, in many ways, is self-deluded. He's deeply tormented, trapped by his past and by the patterns of behavior his past has created, specifically with his sister."

Alan McMichael symbolizes everything that's progressive and modern about America at the turn of the twentieth century. A man of science, he is the polar opposite of Thomas Sharpe, who, with his old-fashioned suits and manners, is all about the past. "Guillermo and I had a lot of conversations about the contrast between Thomas Sharpe and McMichael", recalls Charlie Hunnam, who plays McMichael, "and it really distilled down to the idea [that] Thomas represents the past and McMichael is the future. The film is set in 1901, which was a very exciting time in the evolution of modern society, great innovations in technology, and, particularly, the area of McMichael's interested in: medical innovation. It's a time exploding with excitement and hope and a real energy of people moving forward and progessing. And McMichael personifies that."

The bright light at the ink black heart of Crimson Peak is Edith Cushing. "Edith is very strong-willed and a bit of a loner", says Mia Wasikowska. "She has a feisty spirit and doesn't want to be victimized. She likes to think she's very interllectual and sure of things, but the more she loses, the more it benefits her, in a strange way."

"I wanted to make a love story in which the girl basically saves herself..."