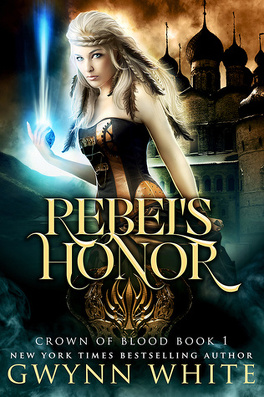 A marriage she didn’t want. A prophecy that could change the world.

Lynx of Norin is a proud warrior who always does what’s right for her people. When an ancient treaty and a thousand superhuman guards force her to leave her land for an arranged marriage, she knows it’s her duty. Lynx begrudgingly travels to wed her sworn enemy, the supernaturally powerful Lukan Avanov.

Lukan grows to love his bride-to-be, but he wasn’t prepared for a second mysterious visitor to ruin his plans. A curse that has been prophesied for ages may come true on Lukan’s watch, and it could bring down his entire family.

As Lynx seeks to destroy the Avanovs from the inside, Lukan fights to keep his kingdom from falling apart. Lives and civilization are on the line. Who will come out on top and who will fall to the deadly curse?

Rebel’s Honor is an epic steampunk fantasy set in a world where anything is possible. If you like page-turning action, captivating stories, and vivid steampunk imagery, then you’ll love the first installment in Gwynn White’s Crown of Blood series.