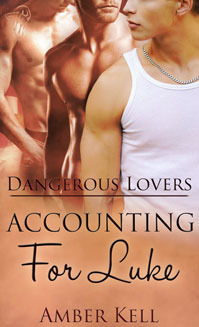 Sometimes love takes more than two to make it work. Someone is stalking Timothy Warren. When Tim calls his lover, Bryce Mann, for help, he gets not only his boyfriend but his boyfriend's work partner, Luke Garcia. Years ago Luke and Bryce had a sexual encounter that neither man ever forgot even though they both tried. Bryce might date Tim but his heart still pines for Luke. When Luke discovers Bryce and Tim s relationship, long-hidden emotions are uncovered and jealousies flare. Luke might not think a relationship with Bryce would work, but he's not ready to let him go. Tim learns of Bryce s long attachment to Luke and surprisingly agrees to step aside. But although Luke desires Bryce, he doesn't want to break Tim s heart. After Luke is injured on a job, he questions whether a trio might work where a duo doesn't seem possible. Between Timothy s stalker and his distrust of Luke s motives will the three of them ever find common ground or will they discover life is easier apart?