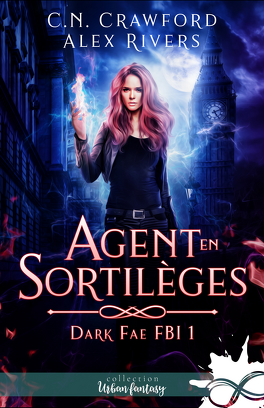 The cold air stung my face, and my breath grew ragged in my lungs as I sprinted. After a few miles of running, I slowed to a walk, catching my breath, my footsteps crunching in the snow. Here, in the freezing forest, where skeletal trees clawed at the sky. I felt more alone than I ever had in my life. The isolation gnawed at my chest and an icy tear rolled down my cheek.

Curled in the corner, a woman hugged her knees. Dirt smudged her beautiful, delicate face. But even in the filth of this cell, she was stunning: violet eyes, full red lips, flame-red hair. Bruises marred her perfect skin, and threadbare rags hung from her curvy body.

Her eyes widened in surprise at the sight of me.

He closed his eyes, breathing in, and his body glowed with amber light. I stared as, before my eyes, he transformed his appearance - darkening his hair, lightening his skin. When he opened he eyelids, he gazed at me with silver eyes.

"There are names for people like you, and none of them particularly nice. Three-born, Lilive, formal, mongrel. They're name for pixies."

Okay. the was stupid. "Um, I'm not a pixie. My parents were both human."

"No, they weren't. Pixies are born from the unholy union of a human and a fae."

I was already learning valuable information. Clearly, far males like to control their woman, to assert themselves over female sexuality. They viewed women as dangerous temptations. I was quickly forming a mental profile of a killer who felt he needed to punish women for stepping out of line - he might go after women in dresses he thought were too short, or who walked around unchaperoned.

The fae lay on the ancient flagstones, candlelight dancing over his handsome features.

I had power over him now, and it intoxicated me. I was beyond taking things slow, beyond being careful. I was a fugitive, at the end of the line. I had very little to lose.

Standing below the towering stone arches of the ancient London church, I stared at him. Candlelight wavered around the nave, and high above me, thick shadows danced over the peaked vaults like malicious spirits. I took a deep breath, the battle over.

At least, I thought it was over.

As I drew closer, he seemed to rally, his lips curling into a grimace. With a roar, he leapt to his feet, charging me in a blur of movement. He moved impossibly fast, and yet to my eyes time seemed to slow down. His powerful arms swung like heavy pendulums, as if he were moving through a sea of honey.

Reflexes took over as I slid aside and let his fist pass me. Then, with both hands, I grabbed his wrist. Dipping my hips, I used his momentum to send him flying into a stone pillar. The crunch of his bones echoed off the vaulted ceiling, and dusty stone rained down on us.

The asshole had wanted to keep me in a cage, to torture me for fun. He wasn’t going to see my merciful side.

With a dark smile curling my lips, I stalked toward him. A trickle of blood ran down his forehead, and he glared at me with his good eye. He snarled, a bestial sound—a predator, unused to being prey. As I came within reach, he tried to punch me in the stomach.

I slapped his hand away, then backhanded him across the face. His head snapped right, and he fell to the floor. I picked him up by the collar and hurled him at a row of pews. When he crashed into them, his body splintered the wood.

And yet he kept going, dragging himself up again, breath rasping.

This time I charged fast, intent on beating seven shades of shit out of him, but he was reaching for his boot. A knife? No. I recognized the familiar shape of a Glock 17, rising to point at my chest. My heart thundered. Shit shit shit. I dove, but not in time.