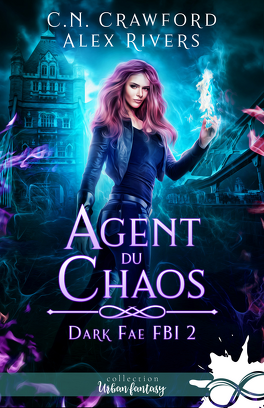 The CIA should have helped me establish communication with the abductor. They could also decipher the runes, and help me figure out who the hell Lucy was. They could have chartered a helicopter for us, to save time. But they were on the wrong track, assuming that I had something to do with Scarlett's disappearance. And now, after I'd displayed my magical powers in the clothing shop, I was sure that they were certain of it. Once again, I was a fugitive.

I let out a small laugh, a creepy giggle, and two of the men whirled, their guns pointed. One of them shook visibly. I was the bogeyman, the ghost in the haunted house, the thing that went bump in the night.

"Sure." I wasn't going back to the FBI offices, but at least this plan would by me some time. Forget serial killers. They were no longer my singular, obsessive interest. I had a lot to learn about the fat, about how I was connected to them. "I'll head back soon."

The lone black carrion crow flew above the Thames, languidly flapping its wings. My eyes followed its flight for a few moments. Although the gray city of London spilled in front of me in every direction, it was the crow that caught my eye, its movements so calm and serene. I liked it up here in the crisp air.

On the monument’s balcony to my right stood a small group of tourists, listening to a tour guide describe the Great Fire of London. His squeaky voice pierced the air as he tried hard to speak above the wind. I half-listened as he explained about the fire.

Apparently, it had begun in a bakery just below us, before incinerating most of the city and ending at the corner of Pye Lane. Therefore, it stood to reason that the true culprit was the sin of gluttony—that and Catholics. While Salem Puritans were blaming cow pox and wilting crops on witches, seventeenth-century Londoners had the Catholics and sin itself to scapegoat.

I glanced at my phone, wondering if Scarlett had sent anything, but nope. The last message I had from her was the same cryptic text that had been waiting for me when I woke up.

Guess what? Coming to London. Work related, we’ll talk when I get there. Meet me at the monument to the great fire at four thirty.

She hadn’t answered my replies, or tell me her flight plans. I checked the flights inbound to London, but I wasn’t even sure what city she was coming from. The words “Work related, we’ll talk when I get there” made no sense. Scarlett was in a covert I’d-tell-you-about-it-but-then-I’d-have-to-kill-you-and-your-cat CIA unit. Normally, she didn’t tell me when or where she was flying, let alone why. Why would this time be different? And what was she doing in London?

For that matter, what was I doing in London? I’d managed to strike a deal with Gabriel, temporarily renting his guest room for a hundred pounds a week. Much cheaper than a hotel, and we both liked the company.

And yet obviously, I should be on my way back to the states. We’d concluded the investigation of the “Terrorist Ripper.” In fact, I’d killed the murderer myself.

I had been shot, and had spent three days in the hospital. The trauma I’d mentioned to my chief wasn’t total bullshit. That said, the doctors had been quite amazed at the speed with which I recovered once they got the bullet out. Clearly, they hadn’t been used to treating pixies.