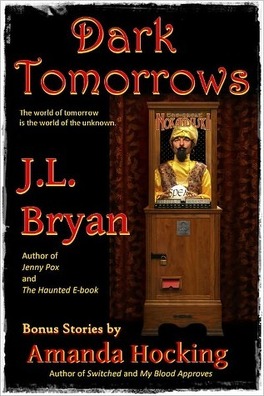 This collection of eight stories includes :

"Spectrum" - A highly adaptable alien crashes into a Shoney's in Tennessee.

"The Fortune Teller's Lament" - A psychic finds his life slowly ruined by a coin-operated fortune-telling machine.

"The Officefrau" - A strange invasive species is moving into Dave's office.

"The Fixer" - At first, Norton thought he'd found an accounting error. Now he's spending Christmas Eve with a special security agent from his company, and learning he found much more.

"Bad Code" - Donald lost himself deep inside the company network, and now he's trying to put himself back together.

"The Long Night" - A spaceship crew is taking a few hundred million tons of radioactive waste away from civilized space. But there's another kind of evil inside the cargo bay, and it wants out.

Plus two bonus stories by Amanda Hocking - "The Second Coming of Pippykins" and "Of Shoes and Doom".