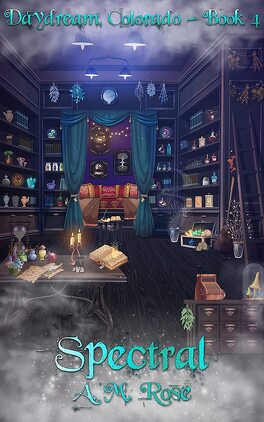 Emmerson helped save the entire town of Daydream from a deranged mage, and he saved someone's life in the process. Granted, he didn't do it intentionally, but he was sure it still earned him a reward or something. A cake. A balloon. A cute, dimpled, sometimes-ghost guy he was magically tied to, covered in cake and tied up with balloons.

He wasn’t that picky.

But things are rarely that simple in Daydream, and Emmerson will soon find out that fighting off a magically overpowered mage was nothing compared to the difficulties of the heart.

West was pretty sure he was used to being invisible. Spending a year as a ghost should not have been a huge change for him. West had nothing but time in his solitude to nurse his regrets, the biggest one being the beautiful witch apprentice he’d never had the courage in life to approach.

When West finds himself not quite as dead as he thought he was, the struggle of a second chance suddenly becomes real. But being magically tied to the person you’ve been crushing on for ages wasn’t part of the plan. And neither were the aftereffects of his little ghost excursion.

Apparently, coming back from the dead won’t be the hardest thing West will have to do.