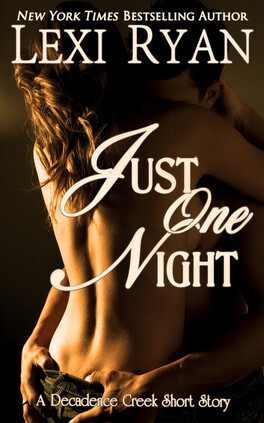 Addison Duval has a secret. A delicious, broad-shouldered, six-foot-three secret with hot eyes, rough hands and a rougher past. Charming, handsome, and off-limits, Chase Montgomery is the only man she’s wanted since her father lured him out of a back alley Louisville chop shop to take a job in their tiny town of Decadence Creek.

After Chase finally takes her up on her old proposition that they spend a night together, will Addison let him risk everything so they can be together more than JUST ONE NIGHT?

Only one woman could make Chase Montgomery consider getting na**d and horizontal in a choir loft. From the moment Addison Duval stepped out of her custom-painted hot pink Corvette and onto the steps of the Decadence Creek Township Baptist Church, he could think of little else.

The woman had the gravitational pull of the sun and was just as hot.

And just as lethal.

He made it through the wedding and as far as the reception without submitting to the urge to pin her up against the nearest wall, to feel those curves pressed against him, to take that mouth.

Once, those full, pouty lips had begged him for everything he wanted to do to her.

Because he was a man, he’d wanted to take her up on her offer. Because he was ten years her senior and a f**king masochist, he’d refused.

Chase stood at the bar with three of Addison’s four older brothers while the fourth made the rounds with his new wife. Dinner was over, liquor was flowing, and dancing was in full swing.

“My sister’s back in town,” Jake, the oldest Duval brother, said, nodding to Addison across the dance floor.

Chase raised a brow at his friend. “I saw that,” he said, thinking, a couple hours ago.