Deep In Your Veins, Tome 3 : Taste of Torment 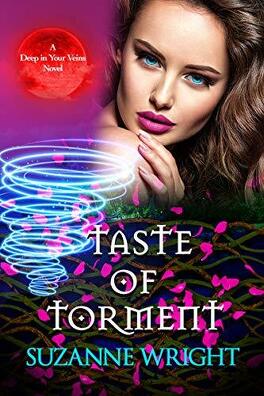 Deep in your Veins (5 livres)

It’s been five months since vampire Sam Parker Bound herself to Jared Michaels, her powerful co-commander within the Grand High Master vampire’s personal legion. Life as a Bound couple has been going just fine…until the Grand High Master announces he will be stepping down from his position and wants Sam and Jared to take his place. Oh joy. Despite Sam’s reservations, she agrees to ascend. But something very powerful has surfaced; something that is quickly decreasing the vampire population and could steal the lives of people close to Sam. At the same time, she finds herself under the scrutiny of vindictive vampires accusing her of exploiting her position as a commander – something that would threaten her ascension. Under the watchful eyes of people who would love nothing more than to strip her of her title, Sam and Jared must continue to conceal her hybrid status and find a way to fight this power that nothing before them has ever been able to overcome. If not, they stand to lose not only the people they hold close, but their future as the Grand High Pair.

Warning: This novel features a female vampire who is a ray of blunt, obstinate sunshine, a possessive alpha male vampire who considers her his only weakness, lots of bad words, some dirty talk, and steamy explicit sex.

Deep In Your Veins, Tome 3 : Taste of Torment

"Answer me one thing honestly: did you find it by accident or did you go looking for it?" My expression must have answered that because he shook his head sadly.

"I just don't like surprises," I said defensively. Which was why I had searched our entire apartment for my birthday presents. I decided against telling him that I'd also found the other two gifts - it was bad enough that he'd caught me playing with my brand new PS6, which hadn't yet been released in the human world, complete with the 'Vampire Nation' game.

Jared's shrewd eyes narrowed. "You found the other presents, too, didn't you?"

Crap. "I'm not comfortable with all these questions."