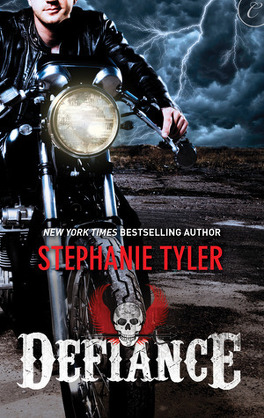 Rebelling against her legacy as the MC's princess, Tru Tennyson escaped the ruthless, male-dominated culture of the Defiance motorcycle club. Three years later, her newfound freedom is ripped away, thanks to a massive hybrid storm that killed millions. Now, in the post-Chaos world of semi-darkness and near-total anarchy where gangs rule, she discovers the dangerous world of Defiance may be the one thing that can keep her safe.

Tru is at the MC's mercy when she's dragged back to her former home … and to the only man she's ever pictured a future with. Caspar is the bastard son of the club's leader, her safe haven when life got rough — and her onetime lover the night she left. When Tru refuses to trade sex for power and be claimed by a rival club leader, she also dares to announce she wants Caspar instead, throwing the MC into turmoil.

Tru's brazen revolt could start a gang war and destroy the club from within. Now both Tru and the MC must wait for Caspar's response … and the inevitable fallout.