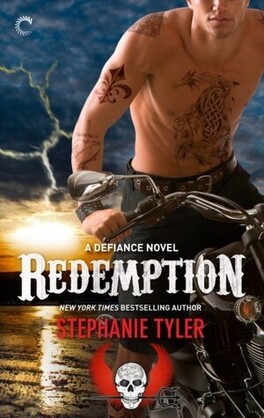 Matthias Robichaud is looking for an alliance. The Defiance motorcycle club is a stronghold in the dangerous world that’s become the new norm and he’s driven to prove he’s tough enough to be sworn in as a full member. But when he sees a beautiful, spirited girl abducted by a rival MC, rescuing her jeopardizes all he’s worked for.

Politician’s daughter Jessa Everson knows what’s expected of her—obedience, loyalty and silence—but that doesn’t mean she doesn’t fight when she’s kidnapped by the Lords of Vengeance. Having Matthias save her is like gaining an avenging angel in leather and tattoos. But Defiance is known for brutal justice, and she may have just traded one bad situation for another.

Matthias’s urge to protect is too strong to ignore, no matter how much trouble Jessa brings to Defiance’s gates. There’s no room in the post-Chaos world for weakness so if Matthias and Jessa have any chance of surviving, they’ll need to put their full strength behind the MC…and hope that the MC will do the same for them.