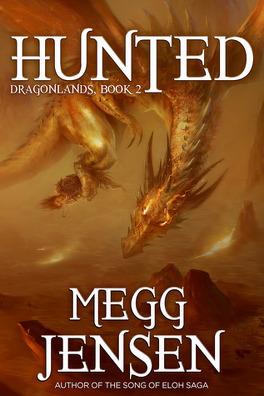 The fog that trapped the people of Hutton's Bridge for eighty years has disappeared, but now so have the villagers.

Fearing the worst, Tressa and Bastian must navigate a new and dangerous world in search of their people. Among their allies are a healer, a warrior, and even a dragon—but their enemies are far greater.

Hutton’s Bridge has long protected a powerful secret, one the dragonlords will kill to control. As the realms rise, Tressa and Bastian risk everything to save their people, until one must make the ultimate sacrifice.

Udor watched in wonder, barely believing his eyes as the fog dissipated. "He did it," he said. Not to anyone in particular. The residents of Hutton's Bridge were as stunned as he. "That little bastard did it."

He would have put his hands on his hips, but those had disappeared in a mass of fat many years ago. He had been stuck in the fog, with a life of simple luxury and a wife who submitted to him. Children who had obeyed his every word. And when Sophia had died, he'd inherited the leadership of the town. He’d finally had everything he wanted.

Then those three had to go and destroy it. He'd tried to convince Tressa to stay behind. He'd wanted her body, yes, but more than that, he’d wanted to end the yearly trek into the fog. Odds were someone would eventually break through and ruin everything good in his cushy life as leader of Hutton’s Bridge.

That day had come.

Chaos erupted amongst the villagers. Udor ambled through the masses, ignoring their pleas for guidance. Now they'd all want to leave. Now he'd have to deal with outsiders. Now his life would be changed for good.

Udor slipped into his cottage and locked the door, not caring his wife and children were still out there somewhere. He needed to be alone. He had to figure out how he was going to deal with this unexpected situation. He rested his hands on his ample stomach and sighed.

When Bastian had come back to town, claiming the world outside existed and was waiting for them, Udor found himself wishing he were a younger man. He could have challenged Bastian. Instead he'd just let the boy take his best men into the fog, armed to the teeth.

And then this. They did it. The fog was gone.

A knock at the door interrupted his thoughts. "Yes?" He couldn't ignore it. Enough people had seen him go into his cottage. And he was still their leader, whether he liked the situation or not.

"It's me, Adam. We're back. Everyone wants you to come out and speak."

Udor groaned, rising from the soft, plump chair. He straightened his shirt and rolled his eyes. "I'll be right out. Glad to hear you're back safely." And he was. Adam was their only skilled healer. Thankfully he'd come back to help his fellow villagers instead of taking off into the new world.

He flung the door open and strode out with a confident gait, though he had no idea what to tell them. He would let their expressions lead him. If there was one thing he'd learned over the years, it was to read the faces of his neighbors. It had helped him get his way many times. All he had to do was recognize their fears or desires and play upon them.

Except for that damned Sophia. He’d hated her arrogant behavior. As if being the last living witness to the day the fog fell meant something. It meant nothing. She knew nothing. The day she died had been the best day of his life.

Sophia had her final revenge, though. After Tressa had gone through the fog, the villagers had entered the cottage she’d shared with Sophia. The others in the village needed her resources. After the first day of rummaging through their things, the door no longer opened. For weeks, they tried. Eventually they'd given up. At least he’d found the book Sophia had kept hidden. The one that explained why their village had been doomed to be draped by fog.

Udor ascended the platform next to the rock where Sophia had lain not more than a moon ago. He wondered for a moment what she would have done in this situation. Probably encouraged everyone to run from town as fast as they could.

He looked out into the crowd. Women wrung their hands or snapped at their oblivious children. Men fidgeted with their farming implements, worried about the dead Adam's men were carrying back into town. "Where is Bastian?" Udor asked Adam.

"Taken by a group of soldiers. The rest are on their way here now."

Udor cursed under his breath. Why hadn't Adam mentioned that back at his cottage? Now he really had to think on his toes.

"My people," Udor said, raising his arms. "This is truly a joyous day. Our town has been liberated. The fog is gone. The world is ours to explore." He glanced at Adam out of the corner of his eye. Adam looked nervous, shifting from one foot to another. "But there are soldiers on their way to Hutton's Bridge. They may mean us harm. We must take up arms and prepare to fight."

The murmurs in the crowd turned to fear and anger.

"We don't know how to fight! And some of our men were killed in that forest." Hazel pointed to the place where Adam's men were dragging the dead back to the village. Her eyes darted over the bodies, probably wishing one was her dead husband, Connor.

Udor shuddered. For years they'd given their dead to the fog on the other side of the village. Now that the fog was gone, what awaited them? A heap of decayed bodies and bones? He didn't want to be the one to find out.

Adam stood next to Udor. "There were beasts out there, but we killed them under Bastian's direction. The people coming now are just men. Like me. Like you.” He pointed to a cobbler in the crowd. “We can talk to them. Reason with them. Fight only if we have to.”

Udor wanted to nudge the redheaded physic away with his elbow. But the people were listening and nodding their heads. Adam’s story held their ears, and because of his profession he held their hearts. Udor was impressed. Adam had never taken on any mantle of leadership in the past, but today he had the people of Hutton’s Bridge in his hands.

"So put down your swords,” Adam said. “Let's meet them with kind words and friendship first."

Everyone cheered at Adam's suggestion.

Udor held a snort inside. If these soldiers had taken Bastian, it was likely they had similar plans for the residents of Hutton's Bridge. He looked around, trying to think of a way to gain back their favor and restore common sense. Anything to wrest control away from Adam.

"Does anyone here remember me?" a voice called from the back of the crowd. All eyes swung to a man and a woman.

Udor's jaw dropped. It couldn't be.

"Jayne?" Adam stuttered. "Jayne, is that you?" He pushed his way through the crowd, running toward a woman who resembled his sister, gone long ago into the fog.

Udor knew the man next to her. Fenn. Tressa's father, Sophia’s grandson. Both of them had entered the fog years ago. They were alive? How many others were out there? Had they all survived? He suddenly felt very sick to his stomach.

"We've come to help," Fenn said as Jayne fell into her brother's arms. "We have friends who can save you. The soldiers headed this way aren't kind. They are coming to destroy you."

"I don't understand," Adam stammered. “Why—”

Udor wanted to say something, but he was too stunned. He felt completely out of control. Damn those three for doing this to him. He liked life the way it was.

"The men coming from the east are going to kill you. I know because they tried to kill us too, but we escaped." Fenn walked amongst the people, his old friends. Even Udor had liked Fenn before he'd disappeared into the fog. He'd always felt they were kindred spirits. "Turn your eyes to the sky. Your saviors are coming."

Udor, along with all of the townspeople of Hutton's Bridge, looked up. He stumbled backward, overcome by the sight of dozens of red dragons flying toward them. His hands shook and his bowels turned to water. "No. No more dragons."

"It's okay, old friend." Fenn placed a hand on his arm. "They'll fly you away to somewhere safe. I promise."

Udor nodded, staring into Fenn’s mesmerizing eyes. "Yes," he said, nodding. "We will go with you to your land of safety."

Udor felt the power coming back to him as the eyes of his people turned to him for comfort and leadership. "Don't be afraid. Fenn is an old friend. Many of you remember him as I do. We can trust him."

Udor swallowed the bile rising in his throat. It was the right decision...he hoped.