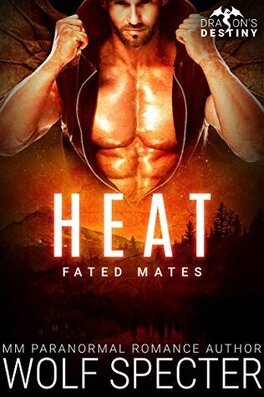 Mankind doesn’t know that dragon shifters like Dane Bennett exist, even though their history has been manipulated by the arrogant beasts for thousands of years. Unlike the rest of his species, Dane has dedicated his life to caring for humans, looking out for them, fighting for them, protecting them — and never, ever letting them know what he really is.

Wesley Byrne just broke up with his boyfriend, and he certainly isn’t looking for another. His twin brother, Ty, thinks a night out with some of the soldiers he serves with will be just what Wes needs to stop moping over a man who doesn’t deserve it.

After four hundred years, the dragon inside Dane recognizes Wes as his destiny, but Dane doesn’t trust his dragon. He’s convinced that humans can’t survive a dragon’s heat, and if he gives in it will force him to break the vow he made the day he discovered his true nature — to never take a human life.

But neither Dane nor Wes can resist the powerful pull of a fated mate, and each of them will get more than they bargained for when they finally come together.